Fenerbahçe comes back to life to take over the throne 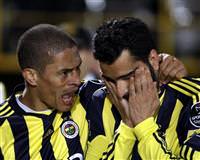 In a heart-stopping game last night in Izmir, Fenerbahçe fell 3-1 behind hosts Bucaspor, and then went on to topple their rivals by 5-3 securing them the leadership spot as earlier in the weekend last week’s league leaders Trabzonspor tied against Eskişehirspor.

Guiza, who scored the fourth goal for Fenerbahçe in his first shoot of the season, was unable to hold back tears of joy. The team's other goals were scored by Emre, Alex (2) and Santos.
Straight to the heart
Fenerbahçe had come to Bucaspor to claim the leadership spot on Sunday night, however they quickly fell behind by 3-1. Double goals by Captain Alex equalized the game. In the 70th minute Guiza came into the game and only 40 seconds later, and with his first touch of the ball, Guiza scored a goal. Santos' score in the final minutes of the game sealed the deal and three additional points taking Fenerbahçe to the top of the league standings.
The intense wind which blew in a number of directions last night posed problems 'controlling the ball' for the players in Izmir's Atatürk Stadium. Bucaspor came out strong and continued to stage a series of attacks. The Lugano-Yobo duo unusually remained spectators to the scene on the field and quite possibly displayed their most incompatible plays ever in the first 60 minutes of the game. In the 16th minute a ball brought in by Leko made it past Lugano and Yobo to Musa who brought Fenerbahçe their first shock of the night. A beautiful strike by Emre brought an equalizer just two minutes later. However, Bucaspor's smart playing continued. In the 32nd minute, Erkan's mid-pass was brought halfway up the field by Musa. Volkan went horizontal to block the ball. In the 38th minute, a similar play was sent to the goalpost by Abdülkadir, bringing the score up to 2-1.

HOT SWEAT ON A COLD NIGHT
At first the assumption that Fenerbahçe 'would press in the second half' seemed empty, however in the 54th minute, Abülkadir scored again. The two goal difference surprised everyone in the stadium; however it seems Fenerbahçe was waiting for this to bring themselves back to life. In the 59th minute, Gökhan's center pass was blocked by Ediz's hand, which resulted in a penalty shot granted to Fenerbahce's in which Alex scored. Three minutes later, with a header, the captain transformed a center pass by Mehmet into another score. As Fenerbahçe gained enthusiasm, Guiza came in to truly celebrate. Just one minute after entering the game, receiving a long pass from Semih, Guiza scored a goal in his first strike of the season, bringing Fenerbahçe the lead: 4-3. After all of the sweat and tears, finally Fenerbahçe began to smile. Santos' score sealed the 5-3 win and came like a gift to the Fenerbahçe fans in the stands.

TEARS FROM GUIZA
Scoring his first goal in a Fenerbahçe uniform 343 days later, Guiza was unable to hold back tears of joy while celebrating the score. Last night's goal was the past Goal King of Spain Guiza's first this season. While speaking on Lig TV in a post game interview, Güiza was unable to hide his emotions and began to cry. Witnessing the footage, Club Chairman Yıldırım called the Spanish player to offer him up morale. At the end of the game, Guiza was hoisted up on his fellow players' shoulders as they celebrated the win.