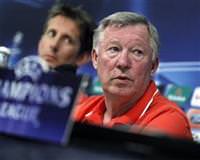 Manchester United came unstuck the last two times they took on unfancied German rivals in the Champions League semi-finals and the twice winners are wary of a similar fate when they visit Schalke 04 in Tuesday's first leg.

Alex Ferguson's team may be favourites to progress to their third final in four years but were knocked out by Bayer Leverkusen in 2002 having been eliminated by Borussia Dortmund in 1997 at the same stage.

The 1999 and 2008 champions are yet to win a two-legged knockout tie against German opposition in four attempts since the start of the Champions League in 1992, losing in the quarter-finals last season to Bayern Munich.

United are well aware of the goalscoring prowess of Spaniard Raul, now at Schalke after 16 years with Real Madrid and who scored twice at Old Trafford to send the then holders out of the 2000 competition.

Raul is the club's top scorer with five goals in this season's competition, while Mexican Javier Hernandez is United's leading marksman with four.

Despite their lowly Bundesliga position of 10th compared to United's six-point Premier League lead, Schalke are unbeaten in their last nine European games and thrashed holders Inter Milan in the quarter-finals.

The winner of the semi-final will play either Real or Barcelona in the final at London's Wembley stadium on May 28.