Manchester United have final date with Barca in sight 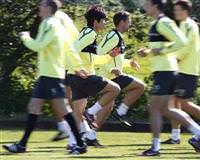 Manchester United are favourites to book a Champions League final date with Barcelona and will hope to expend the minimum amount of energy against Schalke 04 on Wednesday before this week's big domestic battle.

Holding a 2-0 lead from the first leg in Germany, United will make changes to keep players fresh for Sunday's key Premier League match against Chelsea although they are expecting Schalke to pose a stiffer challenge than last week.

"Schalke have nothing to lose and I think they'll have a go, they'll try to win the match there's nothing else they can do," United manager Alex Ferguson told a news conference before bidding to take his team to their third final in four years.

United striker Wayne Rooney faces a late fitness test on his tight hamstring but is likely to be on the bench after Ferguson suggested Premier League top scorer Dimitar Berbatov and Michael Owen would be involved.

Schalke, wounded by a 4-1 Bundesliga defeat by Bayern Munich at the weekend on top of last week's timid performance against United in Gelsenkirchen, have a point to prove and have hailed April's stunning 5-2 win at Inter Milan as proof they are capable of an upset.

"It's up to us to perform in contrast to the first leg," Schalke manager Ralf Rangnick said. "We need to take a different approach, learn from that and apply the lessons."

Rangnick has yet to decide whether to play central defender Benedikt Hoewedes, who scored in the second leg against Inter, but said he would not take "unnecessary risks" if he has not recovered 100 percent from an abdominal muscle injury.

Barcelona completed a 3-1 aggregate victory over Real Madrid on Tuesday. The final is at Wembley stadium on May 28.