Bursaspor – Beşiktaş match postponed due to violent clashes between fans 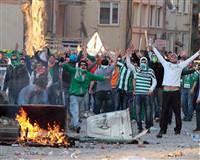 Turkish police detained more than 100 fans in Bursa on Saturday after clashes ahead of Bursaspor's showdown with Beşiktaş, which was later cancelled by the football federation.

Twenty-five police officers and nine fans were injured in the violence, which broke out around Bursaspor's Ataturk stadium. Hundreds of Bursaspor supporters, wanting to prevent opposition fans from entering the venue, began to fight with police several hours before kickoff and pelted them with stones and bottles. Television images showed some fans brandishing baseball bats and others setting fire to rubbish bins. Riot police used pepper spray and water jets to disperse the crowds.
Bursaspor and Beşiktaş encounters have a history of fan trouble, dating from events in the 2003-2004 season when Bursaspor were relegated. Bursaspor authorities decided to allow almost 400 Beşiktaş fans to watch the game as a goodwill gesture but none made it to the stadium. Turkey's football federation said they would announce a decision on the future of the match on May 12.