Midfielder Altintop to leave Bayern at end of season 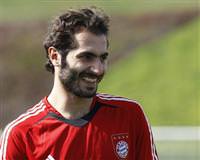 Turkey international Hamit Altintop will leave Bayern Munich at the end of the season after failing to win a consistent starting spot in his four years in Bavaria, the Bundesliga club said on Friday.

Altintop, who arrived in 2007 from Schalke 04 and has played 63 league games and scored seven goals, asked to leave instead of discussing a possible extension to his deal.

"Hamit played the full 90 minutes in only three games this season. That is too little, we understand it and respect it," club CEO Karl-Heinz Rummenigge said in a statement.

"It was Hamit's wish not to extend his contract that runs out at the end of the season."

Bayern are third but are hoping they can beat VfB Stuttgart at home on the final matchday on Saturday and second-placed Bayer Leverkusen lose at Freiburg so the Bavarians can clinch the second automatic Champions League qualification spot.