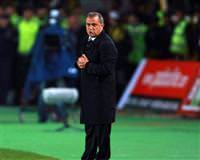 Galatasaray are to appoint Fatih Terim as coach for the third time, new chairman Unal Aysal said late on Thursday, hoping he will restore the club's fortunes after a bitterly disappointing season.

Terim, dubbed the "Emperor" by the Turkish media will take over from caretaker manager Bulent Under.

He had replaced Romanian Gheorghe Hagi who left the post after just five months in March after a string of disappointing results.

The club said in a statement to the Istanbul Stock Exchange it had reached an agreement in principle with Terim, 57, and would make an announcement when the deal was finalised.

"We shook hands with Fatih Terim. We reached a full agreement," Aysal stated yesterday. "We decided to to unite our powers for Galatasaray and do everything we can for its success."

He said the club had also reached an agreement to sign Bolton's Sweden striker Johan Elmander.

The moves to reverse Galatasaray's dip in fortunes were Aysal's first since he was elected a week ago.

Galatasaray shares jumped 7.6 percent on the news in early Friday trade on the Istanbul Stock Exchange.

Galatasaray are ninth in the Turkish first division, 36 points behind league leaders Fenerbahce and Trabzonspor, with just one fixture remaining.

They had started the season with coach Frank Rijkaard but the Dutchman only last until October.

The club were set to play their final match of the season against Konyaspor later on Friday.

Their disappointing season has left them without a place in Europe next season.

"The current situation is a traffic accident," Aysal said.

However they have the consolation of an impressive new stadium, the Turk Telekom Arena, which has a capacity of some 53,000.

Aysal said the club had agreed with Terim on all issues and would seal the agreement on Friday, when the former Turkey national coach was expected to take up his duties.

Terim led Galatasaray to four consecutive league titles in his first spell at the club, culminating with their UEFA Cup final triumph against Arsenal in 2000, the first European trophy for a Turkish club.

That success earned him a job in Italy's Serie A with Fiorentina, before taking over at AC Milan in 2001.

However, expectations of a glittering career in Italy ended less than half a year later with his sacking.

His second stint with Galatasaray in 2002-04 was less successful than his first but he went on to lead the national side to the semi-finals of Euro 2008.