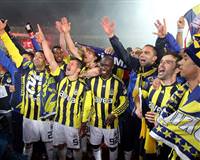 Fenerbahçe clinched their 18th Turkish league title with a 4-3 win over Sivasspor on Sunday, moving ahead of the 17 won by arch-rivals Galatasaray.

Trabzonspor, the Istanbul club's only challengers, won 4-0 away to Karabükspor to also finish on 82 points but Fenerbahçe became champions due to a superior record in matches between the two clubs this season.
Fenerbahçe fans thronged the streets on the Asian side of Turkey's biggest city, chanting and waving flags in the club's blue and yellow colours. They last won the title in 2007 and both Galatasaray and the other major Istanbul club Beşiktaş have won the title since then.
Coach Aykut Kocaman guided Fenerbahçe to the title in his first season in charge after taking over from Germany's Christoph Daum.
Playing in the central Turkish city of Sivas, Andre Santos put Fenerbahçe ahead in the sixth minute. Selçuk Sahin restored their lead near the end of the first half after Jakup Navratil had equalised.
Second-half goals from the club's Brazilian captain Alex and Joseph Yobo sealed the victory for the visitors, despite Erman Kiliç pulling two goals back.
The league triumph will help erase the club's bad memories of last season when Trabzonspor denied Fenerbahçe the title, holding them to a 1-1 draw in their final match which enabled Bursaspor to become champions for the first time.
Playmaker Alex was again at the heart of the club's success, scoring 28 goals to make him the top goalscorer in the league this season.
The 33-year-old has been ably assisted by Senegal striker Mamadou Niang, who joined the club last year from Olympique Marseille and has scored 15 goals.
It was a frustrating end to the season for the Black Sea club Trabzonspor, which had set its sights on winning a first league title since 1984.
Until Bursaspor became champions last season, six-times champions Trabzonspor had been the only club outside of Istanbul to win the league title.
But possibly the most remarkable development this season was the poor performance of former UEFA Cup winners Galatasaray, who were close to the relegation zone for a time towards the end of the season. They ended in 8th, 36 points off the leaders.
It has also been a poor season for Beşiktaş, who were also facing the prospect of missing out on a place in Europe next season until they beat IBB to lift the Turkish Cup earlier this month.