Fenerbahçe footballers party into the night 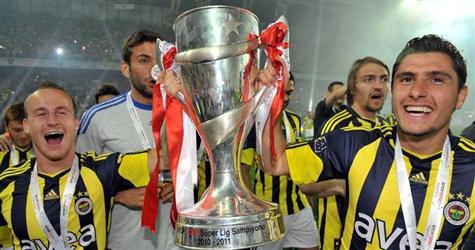 After receiving the cup in a grandiose ceremony yesterday, new champions Fenerbahçe’s footballers partied into the night at a club in Levent.

ALL DAY AND ALL NIGHT CARNIVAL
Fenerbahçe is drunk with victory… This season's champions first held a barbecue in the Samandira facilities and then boarded a convertible bus to be greeted by 55,000 fans at the Şükrü Saracoğlu Stadium.
It took the bus five and a half hours to reach the stadium due to the fervor of Fenerbahçe fans. There, after a series of extravagant performances and cheers, the team was awarded the cup by Turkey's Football Federation Chairman Mahmut Özgener.
Closing out the 2010-2011 Spor Toto Super League season as champions, after the cup ceremony held at the Şükrü Saracoğlu Stadium the team's players, some joined by their spouses, moved on to the ''Billionaire Club'' in Levent.
Fenerbahçe Club Chairman Aziz Yıldırım as well as a number of other team administrators also joined in the celebrations. Amongst those partying the night away were national players Emre Belezoğlu, Gökhan Gönül and Semih Şentürk and foreign players Issiar Dia, Mamodu Niang, Miroslav Stoch and Joseph Yobo. At the evening's close, members of the press, who were not allowed to enter the club, stated that everyone appeared to be happy upon their exit.