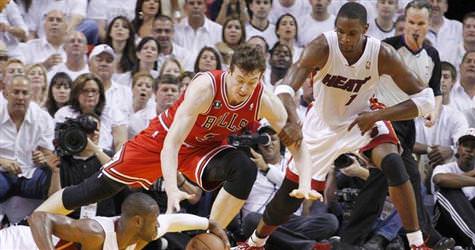 Chicago Bulls reserve center Omer Aşık has been ruled out of the rest of the NBA playoffs after breaking his leg.

Aşık fractured his left fibula in Sunday's loss to the Miami Heat. The 24-year-old from Turkey was told the injury did not require surgery so he tried to play in their next clash, on Tuesday.

But he lasted only two minutes and the team issued a statement confirming he would miss the rest of the series, including Thursday's Game 5, which the Bulls needed to win to keep alive the best-of-seven series.

"He is out for the remainder of the playoffs with an expected recovery of six weeks," the Bulls said.

Aşık appeared in 15 playoff games for the Bulls, but was used only sparingly, averaging one point and 2.1 rebounds per game.