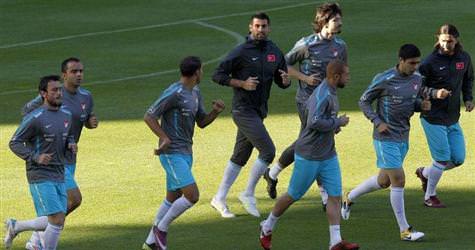 The results from tonight’s game in which Belgium hosts Turkey for their second face-off on their way to the Euro 2012 finals will not only determine whether Turkey continues on, but may also dictate the fate of Hiddink and Özgener.

Tonight the A National Team plays their sixth game in Group A and faces off against Belgium, which is their strongest competitor for the second spot after Germany.
Tonight's game kicks off at 21:45 and will be played in the Roi Baudouin Stadium in Brussels. Tonight's results may very well determine the fate of the team in the Euro 2012 championship as well as that of the team's technical director Guus Hiddink and Football federation Chairman Mahmut Özgener.
Should Turkey win tonight, they will have secured a significant advantage towards pinning second place. In this case, Hiddink, who is also being eyed by Chelsea, would come out a hero.
Özgener on the other hand would refresh trust prior to the TFF General Assembly. A bad result would direct all criticism to Hiddink and could even result in a reassessment of Özgener's candidacy. The game will be broadcasted live on NTV and refereed by Nicola Rizzoli. Tonight the A Group's other contenders Kazakhstan-Azerbaijan and Austria-Germany also play.
Turkey's most probable starting line-up...