Germany, Italy surge on as France are frustrated 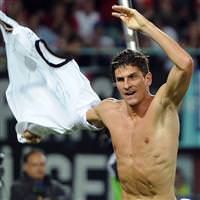 Germany broke Austrian hearts with a last-gasp win in Vienna on Friday, extending their perfect start to Euro 2012 qualifying on a night of far more serene progress for Italy and frustration for France.

Germany returned to the scene of their reverse in the Euro 2008 final to dole out their customary defeat to Austria but only just, Mario Gomez scoring his second goal in the dying seconds to make it 2-1 and secure a sixth win from six Group A games.

Italy produced less drama in a fluent 3-0 win over Estonia, goals from Giuseppe Rossi, Antonio Cassano and Giampaolo Pazzini keeping the Group C leaders five points clear of Slovenia, who were similarly untroubled in a 2-0 triumph over Faroe Islands.

The heavyweights from those two sections are well on their way to securing qualification as group winners, as are France despite being held 1-1 by Belarus in Minsk.

France went into the game seeking revenge for a 1-0 defeat in their opening qualifier in Belarus but Eric Abidal, who lifted the Champions League trophy for Barcelona on Saturday, came back to earth by scoring an own goal.

Despite an equaliser that came almost immediately through Florent Malouda, the twice former champions could not complete a comeback victory.

As it is, France remain four points clear of Belarus at the top of Group D. Romania are up to third on eight points thanks to a 3-0 win over Bosnia, Ciprian Marica getting two of the goals.

If any side can be relied upon to rouse themselves for an heroic effort after the domestic season is over it is Germany who made it six successive wins over neighbours Austria on their return to the Ernst Happel Stadium.

The German goals came at the end of each half, with Gomez scrambling the ball in from a corner in the 44th minute and sending in a bullet header for the second after an Arne Friedrich own-goal had looked like giving the Austrians a point.

Germany are almost certain to win the group but second spot, and a chance of reaching the finals in Poland and Ukraine via the playoffs, is wide open.

Belgium held on to second position as they ground out a 1-1 draw with Turkey who are a point behind them in third.

The hosts opened the scoring after four minutes, Marvin Ogunjimi grabbing his fourth goal in six matches, before a Turkey side managed by Guus Hiddink hit back midway through the first half through a Burak Yilmaz tap-in.

Sweden gave their chances of taking second place in Group E a huge boost as they won 4-1 in Moldova, with two goals from Johan Elmander helping them on their way.

The Dutch lead that group with a perfect 18 points from six matches, with Sweden second on a healthy 12 points from five games.

Lower down the table Finland won 1-0 at San Marino to move up to six points from five games, still in with an outside chance of joining the battle for second.

Croatia went top of Group F with 13 points from six matches, a come-from-behind 2-1 win over Georgia in Split ending a 16-year wait for a victory at the Poljud stadium.

Nikola Kalinic, a local favourite after coming through the ranks at Hajduk Split, sent the crowd into raptures when he turned in Eduardo's low cross for the winner 12 minutes from time.

Greece, who entertain Malta on Saturday, are second with 11 points from five games while Israel occupy third spot on 10 points from six matches pending their visit to Latvia on Saturday.

A total of nine qualifiers are being played on Saturday, with the Group H clash between second-placed Portugal and leaders Norway among the highlights.

Group G leaders England play Switzerland at Wembley and in a tight Group B leaders Ireland travel to Macedonia while second-placed Russia host Armenia and third-placed Slovakia are at home to Andorra.