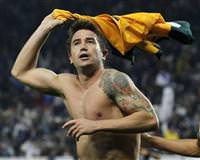 Sydney FC are in talks with representatives of Harry Kewell with the aim of bringing the Australian international back home to play in the A-League next season.

The 32-year-old forward, Australia's first world class player, has not been been offered a new contract by Galatasaray after three years at the Turkish club and his manager Bernie Mandic is entertaining offers.

"Any successful Socceroo who is interested in returning to Australia, be it Tim Cahill or Harry or whoever, will be of interest to us, and Harry is one of the most successful of all time," Sydney FC chief executive Dirk Melton told the Sydney Morning Herald.

"Whether it's the right time for him remains to be seen but we need to show respect to our fans and Harry in that if he decides to come back to Australia, we'll put our case forward."

Born and raised in Sydney, Kewell moved to England as a teenager to play for Leeds United and later had a long spell at Liverpool before moving to Turkey in 2008.

Despite being prone to injuries, Kewell was the youngest player to represent Australia when he made his debut at the age of 17 in 1996 and played in the 2006 and 2010 World Cup finals.

Melbourne Victory also want to bring Kewell back to Australia, according to local media reports, while newly-promoted English Premier League club Queens Park Rangers have also been linked with him.

Every club that has expressed an interest in Harry has been told exactly the same thing at all times," Mandic told the paper.

"'You are welcome to make an offer but keep in mind that the next move Harry makes will not be to a club offering the best financial offer. The key to any deal is the environment for his family'."