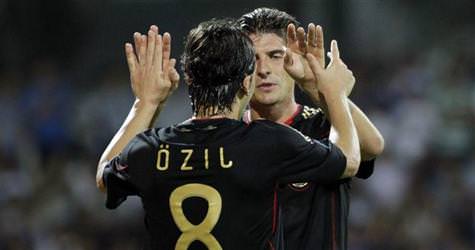 Germany coach Joachim Loew can start planning for Euro 2012 after his side, with Philipp Lahm their oldest player at 27, won 3-1 in Azerbaijan on Tuesday for their seventh win in as many qualifiers.

Loew will have the luxury of almost a year to prepare for the tournament in Poland and Ukraine after his team, facing former coach Berti Vogts who is now with Azerbaijan, moved 10 points clear of Belgium at the top of Group A.

At the most they need three points from their final three games but will also qualify if third-placed Turkey, the only team who can catch them, fail to win all of their last four matches.

Mesut Ozil and Mario Gomez, with his fourth goal in three internationals, gave Germany a 2-0 halftime lead and 20-year-old Andre Schuerrle was also on target in stoppage time.

It was not all plain sailing, however, as the Azeris hit the bar with the score goalless and brought the score back to 2-1 through Murad Huseynov in the 89th minute.

Loew has made a point of putting his faith in youth and his team on Tuesday had an average age of under 24.

"It was a comical feeling, to be the oldest player on the pitch, but that shows how much quality we have in Germany," said Lahm.

"The important thing was that we won today and finished the season with seven wins. It was a perfect season."

Some of the changes were forced on Loew, following injuries to Bastian Schweinsteiger, Miroslav Klose and Sami Khedira.

Vogts, attacked by three men at a press conference on Sunday following Friday's 2-1 loss in Kazakhstan, could only wish he had the same riches to pick from after his team lost for the fifth time in seven group games.

"Here, they play on the street until they are 15 or 16, they have to learn basic skills during our training sessions," he said.

"Germany play in a different league to us and the fans don't understand that."

Vogts has now faced Germany four times as Azerbaijan coach, losing every time including a 6-0 thumping earlier in the group stage.

But the hosts were by no means pushovers and started brightly, Vugar Nadyrov hitting the bar after a defensive blunder by Mats Hummels.

Germany quickly recovered and took the initiative with Benedikt Hoewedes floating over a cross for Ozil who held off the defence to score from close range on the half hour.

The Real Madrid midfielder then set up Germany's second, slicing open the Azeri defence for Gomez, who scored both goals in the 2-1 win over Austria on Friday, to double the lead just before the break.

The hosts refused to give up and Huseynov had already come close before pulling one back from close range after slack German defending.

Azerbaijan sensed an equaliser but instead left themselves wide open and Schuerrle made the game safe deep into stoppage time.

Afterwards, Loew seemed to be thinking more of the end-of-season break than next year's tournament.

"It's 24 days since the end of the Bundesliga," said Joachim Loew. "The players are at the limit after a long season."