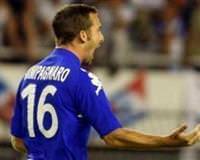 Napoli defender Hugo Campagnaro was recovering in hospital on Thursday after surviving a fatal car crash in Argentina in which three people died.

The Argentine, one of the drivers in the two-car collision, suffered only minor injuries after a seatbelt and airbag came to his rescue in the head-on collision, according to local media reports.

"It was a major crash," Campagnaro's uncle Sergio Castillo told CalcioNapoli24.it. "Hugo is recovering in a hospital in Rio Cuarto where he is undergoing tests. He's conscious but in shock. He has a few cuts and is suffering from concussion. It was the seatbelt and airbag that saved Hugo."

One of the two passengers in Campagnaro's Toyota died in the crash along with both the driver and passenger of the other car on a state road in Cordoba province early on Thursday morning.