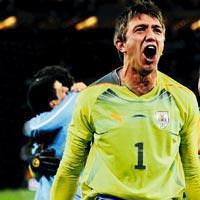 Galatasaray has managed to convince the Uruguayan goalkeeper who had said he wouldn’t play in Turkey with a figure of 14 million Euros for the next five years. Fernando Muslera’s transfer, which includes a trade with Cana, will cost the club up to 21 million!

After experiencing the great shock of losing Miroslav Klose to Lazio, the Galatasaray administration sat down to the table in Rome with the Italian club to continue deliberations regarding a Muslera-Lorik Cana exchange.
When Lazio President Lotito said that in order for the trade to take place, the Uruguayan goalkeeper would have to be convinced, Galatasaray administration member Ali Gürsoy met with Muslera and his manager Fonseca and put an astronomic proposal on the table.
Muslera, who currently earns 1,600,000 Euros with Lazio, was offered a five-year contract at 2,800,000 Euros a year by the young member of Galatasaray's management who may just have successfully convinced the goalie whom had previously said, 'I don't want to play in Turkey."
LORİK CANA PLUS TWO MILLION EUROS!
Willing to pay out 14 million Euros for five years with Muslera, Galatasaray will also be exchanging Lorik Cana, Whose transfer fee is five million, yet the Italians are requesting an additional two million Euros for the trade. Should Galatasaray agree to the offer, the club will be paying out up to 21 million Euros for the Uruguayan goalkeeper.