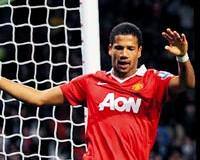 Beşiktaş signs a new striker from the island… After failing to convince Forlan and Costa to join their ranks, through his manager Mendes they went ahead and rented Manchester United’s young Portuguese forward Bebe.

Beşiktaş has finally found the striker they sought and it turns out he is from Manchester United... After an extensive search for a foreign transfer, Beşiktaş club administrative members Serdal Adalı and Cengiz Zülfikaroğlu have reached an agreement with Man U's young Portuguese player Tiago Manuel Dias Correira, otherwise known as 'Bebe'.
The 20-year-old has been rented out for one year at one million Euros, with a buying option set at nine million Euros. Bebe will earn 1.5 million Euros for one year. The transfer, conducted with Manager Jorge Mendes, has brought the fund, which Mendes is a partner in, into play. The fund, which includes Hugo Almeida's transfer fee from the season break, has made an interesting offer to the Beşiktaş club. If the team is pleased with Bebe's performance, then the young star's transfer fee will be purchased through the fund, as with the Almeida case and given to Beşiktaş. Last season, Manchester United added Bebe to their team for nine million Euros. Bebe plays as both a sole forwards as well as in the position right behind the forward.
BEBE SCORED AGAINST BURSASPOR
In last season's Champions League match-up between former champions Bursaspor and Manchester United, Bebe drew attention with his score in the game which ended 3-0 in Man U's favor.