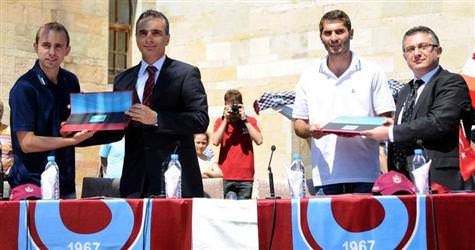 Adrian Mierzejewski was greeted by a group of almost 200 fans upon his arrival in Trabzon. Supporters carried the player on their shoulders all the way from the airport to his car.


The Polish footballer accompanied the fans, by chanting in Turkish "Champions Trabzonspor, Trabzonspor is the best."

-HALİL ALTINTOP ALSO JOINS TRABZONSPOR-
Yesterday, Trabzonspor signed a three-year contract with expat player Halil Altıntop, who played for Eintracht Frankfurt. After touring the Eskişehirspor facilities and later returning to Istanbul, Altıntop met with Trabzonspor Club Chairman Sadri Şener and Tuncay Bekiroğlu, where an agreement was reached. National player Halil Altıntop was then greeted at the airport by Club Manager Caner Çuvalcıoğlu.
Upon his arrival to Trabzon, Halil Altıntop was then taken from the airport to the Trabzon Fatih State Hospital.
Trabzonspor's new Polish player Adrian Mierzejewski and Halil Altıntop have both passed their medical check-ups.
Both players then went on to the Mehmet Ali Yılmaz Facilities and at 14:00 today they attended a signing ceremony held at the Ayasofya Museum. Supposedly, the Trabzonspor Club chose to hold the signing ceremony at this historical location in order to promote tourism for the city.