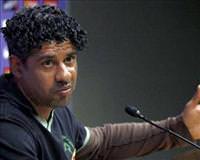 The former Dutch international has signed a three year deal, the AFC said on their website.

Saudi Arabia were set to appoint Brazilian Ricardo Gomes last month but the deal fell through over disagreement on a starting date.

Rijkaard, 48, left Turkish club Galatasaray by mutual agreement last October. He will be expected to help Saudi Arabia, ranked 92 in the world, qualify for the 2014 World Cup in Brazil.