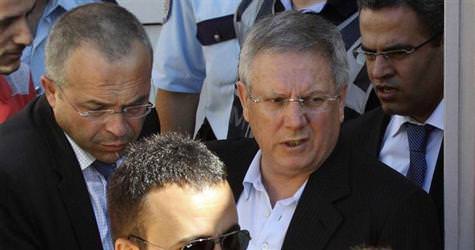 The chairman of Fenerbahçe, Aziz Yıldırım, arrived in court on Friday to face prosecutors over allegations of involvement in a match-fixing scandal that has rocked Turkish soccer.

The Istanbul court has already jailed 25 people, including top executives from Turkish champions Fenerbahçe, pending trial on charges of manipulating 19 matches in the lucrative league.
Prime Minister Tayyip Erdoğan has said the scandal has stained the country's image and preparations for the start of the new season, just one month away, have been left in chaos.
Fenerbahçe Chairman Yıldırım was one of 61 people detained in police raids launched on Sunday. His questioning has been delayed by medical treatment related to heart problems.
He arrived at court early on Friday where prosecutors will recommend whether to release or remand him in custody. In questioning at police headquarters on Thursday he exercised his right to silence, media reports said.
"They want to sacrifice me, but if I speak everyone will get burnt," Yıldırım was quoted as saying.
The Turkish Football Federation is expected to act soon in response to the allegations without waiting for the outcome of the judicial investigation.
Among possible sanctions are the loss of championship title, exclusion from competitions, relegation to a lower division and potentially the loss of tens of millions of dollars in income. Any individuals convicted of match-fixing could face lengthy prison sentences.
SHARES PLUNGE
Shares in Fenerbahçe, who won the league for a record 18th time last season, have lost a third of their value since news of the police raids emerged. Fenerbahçe have denied involvement in wrongdoing.
Trabzonspor, runners-up last season, have seen their shares surge some 40 percent in the last three days on speculation the league title could be awarded to them.
Istanbul police have said they seized eight unlicensed guns in this week's raids after a probe launched in December produced evidence of match-fixing in 19 first and second divisions games.
Out of the 61 detained, 35 have been released though it is not clear if any of them could still face charges.
Prime Minister Erdoğan, a Fenerbahçe fan and member of its congress, has called for a rapid and just outcome to the investigation, saying the affair was staining the country's image internationally.
Those already jailed pending trial include three Fenerbahçe executives, the chairman of Sivasspor, the coach of Eskişehirspor, Sivasspor's goalkeeper and the former chairmen of Diyarbakırspor and Giresunspor.
European soccer's governing body UEFA has set a deadline of July 15 for confirmation of the team taking part in the third Champions League qualifying round. Trabzonspor would normally take that place as runners-up.
Turkish media have cited allegations in police reports such as a striker being offered money to not score in a game, a goalkeeper deliberately failing to prevent a goal and a club requesting a particular referee for a key derby.