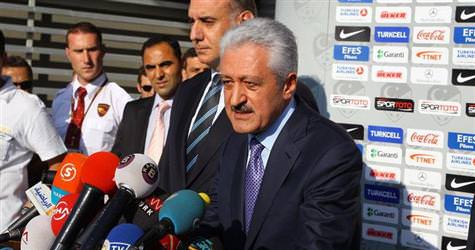 The start of the Turkish season has been delayed a month until Sept. 9 because of the investigation into match-fixing allegations involving some of the country's top clubs, Turkey's football federation announced on Monday.

A Turkish court has already jailed pending trial 31 people, including the chairman of champions Fenerbahçe and the coach and deputy chairman of Beşiktaş on charges of match fixing.
The scandal has plunged the start of the new season, due to start on Aug. 5, into chaos. Announcing the delay in a statement posted on its website, the federation said it would meet with club chairmen on Tuesday.
Media reports have said the Turkish Cup final between Beşiktaş and IBB (Istanbul Büyükşehir Belediyespor) is one of 19 games highlighted in the police investigation.
Beşiktaş won the final 4-3 on penalties to win a place in next season's Europa League.
Another match under scrutiny, according to reports, was Fenerbahce's 4-3 victory over Sivasspor which clinched the title on the final day of the season to secure a place in the lucrative Champions League.
Earlier this month, European soccer's governing body UEFA said that, based on evidence so far, it had no reason to ban any Turkish club from European competitions.