It’s not the end of it all 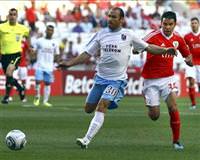 Missing the train for the first time ever in the Champions League third qualifying round, Trabzonspor got hung up by a wrong offside call. Unraveling in the final 20 minutes of last night’s qualifier, Trabzonspor was unable to prevent goals by Nolito and Gaitan, but this does not mean they have lost hope in the greater scope.

Trabzonspor was trying out a relatively new line up last night and had a nice incentive going for them had they won. The team's four new transfers Celustka, Zokora, Adrian Mierzejewski and Henrique played their first official game in Trabzonspor last night against Benfica. The club had also offered their players a 1.5 million dollar bonus should they pass this qualifying round. With last night's 2-0 loss however, Trabzonspor comes in the underdogs to the return leg scheduled for August 3rd, 2011.
Twice European champions Portugal's Benfica earned an important two-goal cushion in the first leg of their Champions League third qualifying round tie against Turkish side Trabzonspor on Wednesday, winning 2-0 in Lisbon.
The Portuguese club, who reigned supreme in 1961 and 1962, will start as favourites for the second leg after late goals from Spanish midfielder Nolito and Argentine Nicolas Gaitan left Trabzonspor facing an uphill task.
There were also first leg wins for Croatian champions Dinamo Zagreb, FC Copenhagen, Czech's Viktoria Plzen and Israel's Maccabi Haifa.
"My team pleasantly surprised me today, we were physically stronger than Trabzonspor in the second half," said Benfica coach Jorge Jesus. "The first goal was key, we played with a lot of experience and Nolito came in fresh at a time when Trabzonspor were giving away more space."
Zagreb will also approach their second leg next week full of confidence thanks to a 2-1 victory in Finland against HJK Helsinki achieved with a late goal by Brazilian Sammir.
Dinamo, who have not reached the Champions League group stage since 1999, went behind when Alexander Ring fired the hosts ahead with a superb 15th-minute lob.
The visitors equalised four minutes later with a comical own-goal by Brazilian defender Rafinha who miscued an attempted clearance straight past his helpless keeper.
Shamrock Rovers kept alive their dream of becoming the first Irish team to reach the Champions League's group stages as a 1-0 away defeat in Copenhagen, who reached the round of 16 last season, set up a lively second leg in Dublin.
Denmark's other representatives in the round, Odense BK, drew 1-1 at home to Greek club Panathinaikos -- Tore Reginiussen equalising for the hosts in the last minute.
Plzen, playing in the Champions League qualifying rounds for the first time, had Vaclav Pilar to thank for a 1-0 victory away to Norwegian side Rosenborg.
Haifa edged a narrow 2-1 home win against Maribor while Belgium's Standard Liege drew 1-1 at home to FC Zurich after Nacho Gonzalez came off the bench to equalise in the 90th minute after Admir Mehmedi put the Swiss side ahead.
The third qualifying round winners are battling for a spot in the playoff matches where they could seal a berth in the lucrative group phase.
Champions League third qualifying round, first leg results on Wednesday:
Benfica (Portugal) 2 - Trabzonspor (Turkey) 0
Rosenborg Trondheim (Norway) 0 - Viktoria Plzen (Czech Republic) 1
Standard Liege (Belgium) 1 - FC Zurich (Switzerland) 1
Maccabi Haifa (Israel) 2 - Maribor (Slovenia) 1
FC Copenhagen (Denmark) 1 - Shamrock Rovers (Ireland) 0
OB Odense (Denmark) 1- Panathinaikos (Greece) 1
HJK Helsinki (Finland) 1 - Dinamo Zagreb (Croatia) 2
Played on Tuesday:
Ekranas Panevezys (Lithuania) 0 - BATE Borisov (Belarus) 0
FC Zestafoni (Georgia) 1 - Sturm Graz (Austria) 1
APOEL Nicosia (Cyprus) 0 - Slovan Bratislava (Slovakia) 0
Litex Lovech (Bulgaria) 1 - Wisla Krakow (Poland) 2
Dynamo Kiev (Ukraine) 0 - Rubin Kazan (Russia) 2
Twente Enschede (Netherlands) 2 - Vaslui (Romania) 0
Rangers (Scotland) 0 - Malmo (Sweden) 1
Racing Genk (Belgium) 2 - Partizan Belgrade (Serbia) 1