Turkey set to be dropped from 2012 F1 calendar 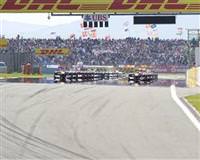 Turkey looks set to be dropped from next year's Formula One calendar after teams said a sad farewell to the poorly-attended grand prix despite its fate not yet being officially sealed.

The Istanbul event was included on a record 21-race calendar for 2012 issued by the governing FIA in June but rumours in the Hungarian Grand Prix paddock have been rife that F1 supremo Bernie Ecclestone is planning big changes.

"I think it is always sad when you lose a grand prix from the calendar. We are sorry to see Turkey go," McLaren managing director Jonathan Neale told reporters on Friday.

Empty stands have characterised the unloved race since it appeared in 2005 and next year will see the return of the United States Grand Prix at a new track in Austin, squeezing space on the calendar.

"The calendar already has 20 races, as a smaller team 21 is too many," Virgin's Graeme Lowdon added, seemingly confirming the news.

Autosport has reported that next year's Bahrain Grand Prix, cancelled this season because of political turmoil, could be moved to the end of 2012 from the start to give the country time to sort out its problems.