Lugano says ‘yellow light’ while Dia is headed for Toulouse 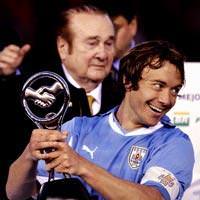 Referred to regularly in conjunction with Juventus, Diego Lugano announced yesterday on Tuttosport that should Fenerbahçe be relegated from the Super League, he would leave the team.

Underlining that the investigation into match-fixing was a difficult process, Lugano said that he would be waiting to see what decision is reached. According to sources, Juventus is also waiting to see what the outcome is in regards to the allegations of match-fixing in Turkey's Football Federation and is calculating the option of adding the Uruguayan star at no cost to the team.
There is also speculation surrounding claims that both Fenerbahçe players Niang and Dia have also informed the administration of their intentions to leave the club. It is being said that Niang has received a number of serious offers from Qatar. According to the information obtained, Toulouse has taken action to sign Issiar Dia and has supposedly offered Fenerbahçe 6.5 million Euros for the player.
Meanwhile, according to the news received, Fenerbahce's captain Alex, who is currently vacationing in Singapore, has supposedly told the administration that there is no way he will leave the team.