Real and Barca brace for yet another 'clasico' 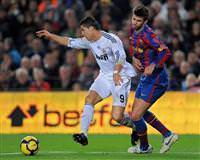 Real Madrid and Barcelona can get a handle on how their pre-season preparations are going when the sides clash in the Spanish Super Cup this weekend.

The traditional curtain raiser for the league campaign is going ahead despite the players' union calling a strike for the first two weekends of the new campaign in the top two divisions.

Real and Barca, the world's two richest clubs by revenue, slugged it out an unprecedented five times last season in three different competitions.

Barcelona came out on top in the league and Champions League semi-final while Real won the King's Cup in a series of matches notable more for the increasingly acrimonious atmosphere between the clubs than for the quality of their football.

Hostilities resume again at the Bernabeu on Sunday (2100 GMT) with the second leg at the Nou Camp on Wednesday (2200). La Liga is scheduled to kick off the following weekend.

Super Cup holders Barca have eclipsed their arch-rivals over the last three years by winning two European Cups and a treble of league titles, which means this showdown is important more as a psychological indicator of the clubs' strengths.

Real coach Jose Mourinho ran Barca close in his first campaign in Spain and has often stated that his teams usually do better in his second year in charge.

They have won all seven pre-season warm-up matches with ease, though only Portuguese defender Fabio Coentrao has had the chance to make an impression out of the new arrivals.

Turkish midfielders Hamit Altintop and Nuri Sahin have been sidelined with injuries. Mourinho also has a doubt over Sergio Ramos, who pulled out of Spain's squad for the midweek friendly against Italy with a recurrence of a back problem.

On the positive side, France striker Karim Benzema has been in fine form scoring eight goals in pre-season to date.

SLOW STARTERS
Barca boss Pep Guardiola, who has three wins and one draw from his four visits to the Bernabeu as coach, has yet to give his only new recruit so far his debut.

Chile forward Alexis Sanchez, along with Argentine Lionel Messi, have only just returned to training after July's Copa America tournament.

Many Barca fans will be hoping the drawn out transfer saga surrounding Arsenal captain Cesc Fabregas will have been concluded by the weekend and that the club's former youth team player will at least be in attendance in the stands.

Barca's pre-season form has been patchy and they often take a while to get into their stride in a season.

"They are always very difficult games and very tense when we play against Real Madrid," Barca forward Pedro told reporters.

"We are starting the season with a difficult test but I'm sure the team will respond."

Guardiola has a number of injury doubts including first-choice defensive partnership Carles Puyol and Gerard Pique, along with Xavi, Maxwell and Ibrahim Afellay.