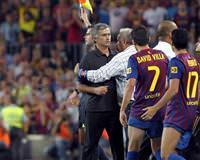 Real Madrid later expressed their surprise at the federation's decision five days after the clash at the Nou Camp, and called for them to take into account the "provocations" suffered by their team.

The RFEF examined television images of the moment when Mourinho jabbed a finger into the eye of Barcelona assistant coach Tito Vilanova, who responded by cuffing the Portuguese round the back of the head. The incident was not recorded in the referee's report.

The federation said both men would be investigated. Mourinho's actions could earn him a multi-match ban.

A huge scuffle between the two sides took place at the end of Wednesday's second leg, when Barca were crowned Super Cup winners, after Real defender Marcelo leaped feet first into a tackle with Barca new boy Cesc Fabregas.

Real later released a statement, saying they had done their best not to "feed the tense atmosphere created by such events."

"Real Madrid wishes to express how surprised it is to see this investigation is being ordered five days after the match, curiously just a few hours after the president of Barcelona publicly demanded the federation to take action.

"The club hopes it throws light on to the provocations, humiliations, insults and aggressions that our first team squad and coaching staff were subjected to both on the pitch and inside the tunnel leading to the dressing rooms. These things regrettably gave way to the incidents that took place."

Both Real and Barca have 10 days to present their cases to the federation.