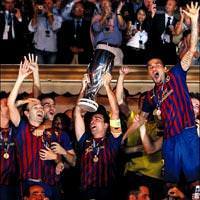 Lionel Messi scored one goal and created another as Champions League winners Barcelona lifted their fourth European Super Cup trophy on Friday with a 2-0 victory over Porto who finished with nine men.

An awful back pass in the 39th minute by Colombia midfielder Fredy Guarin was intercepted by Messi and the Argentina forward slotted the ball in to the net after showing masterful balance to sidestep goalkeeper Helton.

Europa League winners Porto fell further behind after 88 minutes when Messi chipped a pass and substitute Cesc Fabregas controlled the ball with his chest before firing in.

Rolando was sent off for a second bookable offence in the 86th minute and Porto team mate Guarin received a straight red card four minutes later for lunging at Javier Mascherano.

Barca, who will make a delayed start to their domestic league season when they meet Villarreal on Monday, have now collected two major trophies in 10 days following their Spanish Super Cup triumph over arch-rivals Real Madrid.

"It was tough to beat Porto, they are a great team," captain Xavi told Spanish television. "The pitch was not in good condition, they are a very physical side and pressed us high up.

"We maybe weren't as superior as in other matches but ... it's another European title that fills us with excitement. This team is making history and we believe we can still win more trophies."

Messi, named on Thursday as the inaugural winner of UEFA's Best Player in Europe award, continued where he left off last season -- a campaign that yielded 53 goals.

Barca also showed they are not a one-man team and even without injured centre backs Gerard Pique and Carles Puyol they looked strong all over the pitch.

They needed to be at their best too, especially when Hulk twice went close for Porto in the opening 12 minutes.

Barca, who started with nine of the team that beat Manchester United 3-1 in the Champions League final at Wembley in May, gradually wrested control of the midfield.

Andres Iniesta, man of the match at Wembley, again controlled proceedings in midfield with Xavi and Seydou Keita.

Pedro and David Villa posed their usual threat up front but Porto, acclaimed for playing a similar style of attacking soccer to Barca, were always in the game and gave plenty of reasons to believe they will do well in this season's Champions League.

"We played well and gave big problems to a great Barcelona side who many people consider to be the best team in the world," coach Vitor Pereira told Portuguese television.

"We don't live on moral victories but I leave here satisfied with my team. We had a good first half and even after the first goal we came into the second half with a will to turn it around and had some chances."