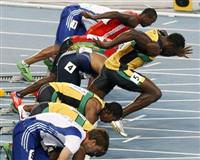 World record holder Bolt ripped off his vest as soon as the second gun went off to indicate the false start and was led disconsolately from the track, his three years of dominance of the short sprint titles over.

However he refused to indulge in self-pity after watching his fellow-Jamaican take his title. "Looking for tears?," he said. "That's not going to happen."

Bolt's 21-year-old training partner Blake made the most of Bolt's absence, spreading his arms out wide as he stormed home in 9.92 seconds to claim his first major title.

"It's a wonderful feeling, I have been praying for this moment my whole life," he said. "I just tell people anybody can do it, you just stay focused, pray to God. My training partner Usain Bolt was out and I got the job done."

American Walter Dix pipped Kim Collins to silver in 10.08 seconds, dipping over the line to leave the 2003 champion from St Kitts and Nevis with a third world championship bronze medal in 10.09.

Dix's silver was his first at the world championships although he won bronze in both sprints at the 2008 Beijing Olympics.

The evergreen Collins, who belied his 35 years with a blistering start, said he had every intention of returning to compete at the next world championships in 2013.

"I am going to come back in Moscow and make it 10 and I don't think anybody is going to go 10 world championships," he said.

France's European champion Christophe Lemaitre was fourth in 10.19 ahead of Antiguan Daniel Bailey (10.26). Another Frenchman, Jimmy Vicaut (10.27), finished sixth with Jamaican Nesta Carter last of the finishers in 10.95.

The field for the final had already been weakened by the absence through injury of Bolt's most likely challengers, American former world champion Tyson Gay and former world record holder Asafa Powell.

Jamaican Steve Mullings and American Mike Rodgers, two other sprinters who have run faster than Bolt this year, missed the championships because of doping violations.

Bolt had been considered vulnerable after a less than stellar season by his own standards but had produced commanding performances in the heats and semi-finals.

The 24-year-old still has a chance to go home with an individual gold medal when he defends his 200 metres title later in the championships.

Collins said he expected the world governing body to look again at the automatic disqualification for athletes who false start which was introduced at the start of last year.