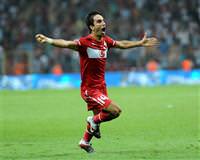 Turkey's Arda Turan grabbed a last-gasp winner to secure a 2-1 victory over Kazakhstan in Euro 2012 Group A qualifying which lifted them to second place on Friday.

Burak Yilmaz put the hosts ahead in the 31st minute when he latched on to a cross and fired the ball beyond keeper Aleksandr Mokin.

Ulan Konysbayev equalised for Kazakhstan in the 55th when his cross from the right flew over keeper Volkan Demirel and into the net.

Burak had a chance to put his side ahead in the 62nd minute when Turkey were awarded a penalty for handball but his spot kick hit the right post.

Turkey then had a goal disallowed 16 minutes later but Arda struck in the seventh minute of stoppage time, his free kick going into the corner of the net off the defensive wall.

The result gave Turkey 13 points from seven games, ahead of third-placed Belgium (12 points) who drew 1-1 in Azerbaijan on Friday.