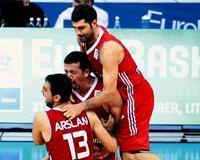 Olympic hosts Britain were eliminated from the European championship on Monday despite an 88-81 win over Poland on Monday which allowed Turkey to go through. Holders Spain and hosts Lithuania also advanced from preliminary Pool A, while France, 2009 runners-up Serbia and Germany joined them from Pool B.

Surprise package Macedonia, 2005 champions Greece and unfancied Finland progressed from Pool C along with Russia, Slovenia and Georgia, the top three teams from Pool D.
The second stage will feature two groups of six, with the top four teams from each group advancing to the quarter-finals of the tournament which is also an Olympic qualifying event.
Britain produced several good performances in Lithuania and bowed out on a high note after an excellent performance against the Poles.
"We were just happy for ourselves to win this game and to go home with two wins is a good result for us," said forward Joel Freeland, who shone with 27 points and 11 rebounds after hitting all his 12 shots from the field.
Facing an early exit after losing to Poland on Sunday, the Turks could hardly believe their luck as several hundred of their vociferous fans roared on the British against Poland in the closing stages of the gripping contest.
Knowing they were through no matter what they did against Spain, a relieved Turkish team stunned the champions 65-57 two hours later after conceding only 19 second-half points.
"We were ready to go home but someone helped us today and that gave us the impetus to fight hard," said Turkey forward Emir Preldzic, the game's top scorer with 18 points.
"We have the potential to beat anyone but (on Sunday) we made a huge mistake because we started thinking about the game against Spain before we even played Poland," added point guard Ender Arslan.
"We must make sure it doesn't happen again and motivate ourselves for one game at a time."
THRILLING CLIMAX
France advanced as the top team from Pool B with five wins out of five after a 97-96 overtime defeat of Serbia in the day's most entertaining contest with a thrilling climax.
The lead changed hands time and again before Serbia forward Dusko Savanovic, who turned 28 on Monday, missed an easy lay-up on the buzzer with the French defence beaten by a no-look pass from Stefan Markovic.
The tournament's top performer Tony Parker led France with 24 points and six steals and point guard Nicolas Barum added 18, while Marko Keselj stood out for Serbia with 25 points.
Russia remained the only other team with a perfect record after an equally dramatic 65-64 win over Slovenia. Vitaly Fridzon scored his only field goal in the last second of the game to crown his team's comeback.
Macedonia's impressive run continued with their fourth straight win, a 75-68 success over Bosnia that took them through to the second stage for the first time as an independent nation.
In contrast, fellow former Yugoslavs Croatia stretched their winless streak against Greece to 16 years with a 74-69 defeat and crashed out in the preliminary stage for the first time since they gained independence in 1992.
"We've had an awful tournament and as the team captain I have to apologise to all our fans for letting them down," said Croatia's captain Marko Popovic.
"There are no excuses because we had a very kind draw, we were not good enough and I hope some future generation will do better because Croatia deserves better," he added.
Finland advanced with a 71-65 victory over Montenegro, Germany progressed with an 81-80 win over Latvia and Georgia went through despite a 79-69 loss to Bulgaria.
The second stage begins in Vilnius on Wednesday, when Germany play Spain, Lithuania take on Serbia and Spain clash with Turkey in the Siemens Arena seating 15,442 fans.