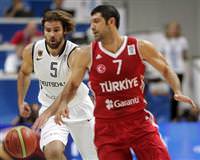 Holders Spain cruised into the European basketball championship quarter-finals with a match to spare in the second group stage after crushing 2009 runners-up Serbia 84-59 on Friday.

Hosts Lithuania still have work to do after a 73-67 defeat by France, who stretched their unbeaten record to seven games, while Germany rekindled their hopes of reaching the last eight with a 73-67 win over Turkey.
France top Group E with four wins, Spain have three wins and one defeat while Lithuania have a 2-2 record. Serbia, Turkey and Germany all have one win and three defeats and are still in the hunt for a berth in the knockout stage.
The Spaniards romped to an early 15-5 lead against a disorganised Serbian team and never looked back as they had 11 rebounds and eight steals more than their opponents.
Centre Pau Gasol and his younger brother Marc were again at the heart of Spain's success, the former scoring 26 points to go with eight rebounds and the latter finishing with 20 points and 10 rebounds in the one-sided contest.
Marc Gasol, perennially overshadowed as a top player by his elder brother, who helped the Los Angeles Lakers to the 2010 NBA title, played down his immense contribution to Spain's smooth run in Eurobasket 2011.
"How I play personally is not as important as how the team performs and the team is improving day by day," he told Spanish television after delivering a basketball lesson to his Serbian rivals Nenad Krstic and Kosta Perovic.
"Today we played a very complete game, particularly in defence and we now have to see where we will finish in this group."
Serbia's coach Dusan Ivkovic was furious with his team's nonchalance which produced a third straight defeat and left them needing a win in their last group match against Turkey on Sunday to advance.
"What I don't understand is that my team has shown less respect for Spain, whose players have won NBA, European and world titles, than they have shown for us," he told a news conference.
Spain will win the group if they beat France on Sunday but the French, led by their outstanding point guard Tony Parker, will in all likelihood be a much tougher nut to crack.
ROSTER DEPTH
Having secured their own quarter-final berth with two games to spare after Wednesday's win over Turkey, the French showed no nerves against Lithuania, who were roared on by a passionate 11,000 home crowd in the Siemens Arena.
What they did demonstrate was depth in their 12-man roster which could lift them to their first title in any major event.
Reserve shooting guard Nando De Colo started instead of the injured Mickael Gelabale and finished as the game's top scorer with 21 points, burying 11 of them in the latter stages to give France a 62-54 lead which sealed the rip-roaring contest.
Parker, a triple NBA champion with the San Antonio Spurs, was also instrumental with 19 points and Chicago Bulls centre Joachim Noah capped an excellent all-round performance with nine points and 13 rebounds.
"Tonight I took my opportunity to play my game with more time on the court and playing hard was they key to our success," De Colo told a news conference.
Lithuania's coach Kestutis Kemzura said: "Congratulations to the French team, we are now looking forward to a crucial game (against Germany) on Sunday and we are not going to make an early exit because we will win."
Turkey had pulled one of the shocks of the tournament with a preliminary pool win over Spain but then lost to France and their lack of resources was also obvious against Germany.
Los Angeles Clippers centre Chris Kaman led the winners with 20 points, Dirk Nowitzki scored 19 and forward Philipp Schwethelm added 14, including a barrage of three-pointers in the fourth quarter which swung the tie Germany's way.
"It's great that we have given ourselves a fighting chance of reaching the last eight and it will be a big challenge," Nowitzki, who steered the Dallas Mavericks to the 2011 NBA title, told Germany's Sport 1 television.
"It will be difficult against the Lithuanians because they will have the crowd behind them and we also need other results to go our way."
Last Update: Sep 10, 2011 10:52 am
RELATED TOPICS