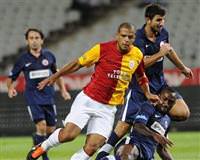 The following are the results of this weekend’s kick-off start to the Spor Toto Super League.

The Super League continues to surprise, reaping interesting results in its very first week. With high expectations, a series of new international star transfers and the addition of a legendary technical director, Fatih Terim's Galatasaray misfired on their first game of the season played Sunday. Embracing technical director Abdullah Avcı's positive football philosophy, Istanbul Büyükşehir Belediyespor beat Galatasaray by two-nil in the Olympic stadium.
Tonight Fenerbahçe faces off against Orduspor for the teams' first game of the season. After a controversial summer this highly anticipated Fenerbahçe game will be rounding off the first weekend in the Spor Toto Super League.

The following is a list of results from Week One in the Spor Toto Super League: