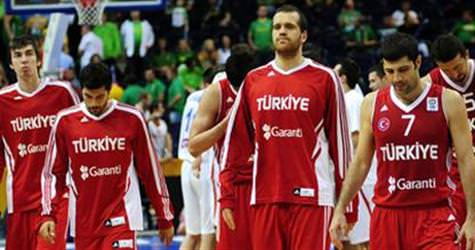 Turkey’s National Team suffered a one point set-back against Serbia, losing by 68-67 yesterday, and bidding farewell to the 2011 European Basketball Championship quarterfinals.

It was on the same date last year that Turkey beat Serbia which took them to the finals against the United States. Last night's fate was left in the hands of Ersan Ilyasova who was unable to score the winning shot which would have seen Turkey continuing on in the competition. Turkey's National Team heads home with dreams dashed.

Beaten by Turkey by a shot on the buzzer in last year's world championship semi-final in Istanbul, the Serbs gave their bitter rivals a taste of their own medicine after they nearly blew a 13-point lead.

Serbia seemed to be cruising after carving out a 31-18 advantage early in the second quarter but started fading as the Turks bounced back and got themselves into a position to repeat the 2010 feat.

Turkey had the last possession but could only watch in anguish as their forward Ersan Ilyasova missed a baseline jump-shot which bounced off the rim.

"We got sweet revenge for going down in the same fashion against Turkey last year, but the most important thing is that we beat a great team and progressed to the knockout stage," said Serbia's shooting guard Milenko Tepic.

"Some buzzer-beaters you win, some you lose and when you look back at the end of your career they probably cancel each other out in terms of how many you've won and lost.

"I am not saying it's carved in stone, but we deserved to win today because we led from start to finish," added Tepic.

Serbia point guard Milos Teodosic finished with a game-high 20 points and eight rebounds but also had six turnovers, while Turkey will rue missing a staggering 13 of 29 free throws.

Germany and their talismanic forward Dirk Nowitzki bowed out of the European championship on Sunday after an 84-75 defeat by Lithuania which sent the hosts through to the knockout stage of the competition.

Spain thumped France 96-69 after both teams had already booked their berths in the last eight.

Spain finished top of Group E and will play either Finland or Slovenia for a semi-final place, while second-placed France will meet 2005 champions Greece.

Third-placed Lithuania meet the losers of Monday's clash between 2007 champions Russia and upstarts Macedonia, the top two teams in Group F, while the winners of that match will face Serbia.

Neither the Dallas Mavericks forward, who led the team to the 2011 NBA title, nor his Germany team mates looked likely to accomplish the tasks as Lithuania were in control from start to finish in front of a passionate 11,000-strong home crowd.

"Nowitzki is maybe the greatest player Europe has ever produced," Germany coach Dirk Bauermann, who steered them to a runners-up finish in 2005, told a news conference.

"He had a very short break after a long season in the NBA, but he dragged himself here and gave everything he could, he is a role model for young players and my gut feeling is that he will come back.

"I don't think he is done playing for Germany and I take my hat off to him because it was obvious that he wasn't at full strength, what is more I doubt any other NBA player would have come here 10 weeks after winning the title."

A tired-looking Nowitzki scored 16 points, hitting only four of his 17 shots from the field, as Los Angeles Clippers' Chris Kaman produced a valiant but futile solo effort for the Germans with 25 points and 11 rebounds.

Shooting guard Robin Benzing also enjoyed a good performance with 18 points, making all his seven shots from the floor and two from the foul line, but a more balanced Lithuanian team was just too strong.
France rested their top players Tony Parker and Joachim Noah against Spain and although a makeshift French side held their own in the first half, they collapsed in the second as Spain never took their foot off the gas.

The Spaniards had five players in double scoring digits, led by Juan Carlos Navarro with 16 points and Rudy Fernandez on 15, as France crashed to their first defeat in the tournament after seven straight wins.

"We are pleased with the result and the top spot in the group but we know it's not going to be the same French side if we meet again in the medal rounds," Fernandez told Spanish television.

"Now is the time to think about the quarter-finals because we only thinking of one game at a time."