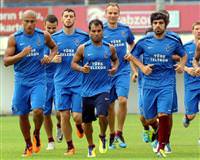 Facts and Figures relating to Wednesday's matches in Groups A-D.

* Inter have lost four of their last five CL matches, including their last two at home.

* Inter have won all four home games against Turkish opponents by at least a two-goal margin. That includes a 3-0 win in the CL four seasons ago over Fenerbahce, the Turkish champions who were replaced in this season's competition by Trabzonspor because of match-fixing allegations.

* Trabzonspor will not be making their CL in auspicious circumstances. Promoted from the Europe League qualifiers because of Fenerbahce's suspension, they have not won any of their last five European games and just one of their last nine.

* Since beating Inter 1-0 in the 1983-84 UEFA Cup, Trabzonspor have played five games against Italian clubs without winning any.

* In the battle of the two Champions League debutants,

Manchester City have the advantage of starting with a great home record. They are unbeaten in their last 12 European home games of which they have won 10.

* City have been waiting for more than 40 years to record their first victory in Europe's premier club competition after flopping in the first round of the European Cup against Turkey's Fenerbahce in 1968-69.

* Napoli have not won any of their last four European away games and have conceded 11 goals in those matches.

* Napoli have lost on all three previous visits to England and all by at least a two-goal margin, including a 3-1 defeat to Liverpool in last season's Europa League.

* Villarreal have won their last nine European home games and are unbeaten in 10.

* Villarreal have a good CL record. In their only two previous appearances they advanced to the semi-finals in 2006 and the quarter-finals in 2009.

* Bayern, playing their 150th CL game and their 250th in the European Cup/CL, have won five of their last six European away games and four of their last five in the CL.

* Bayern have not fared well on previous visits to Spain, failing to win any of the last six and losing five, the last a 4-0 defeat to Barcelona in the 2009 quarter-finals.

* Lille have failed to score in four of their last seven CL home games but have only lost one of them, to Manchester United in 2007, and have conceded a mere four goals in those matches.

* Lille's only previous game against a Russian club was a 2-1 home win over Zenit St Petersburg in the 2004-05 UEFA Cup group stage.

* CSKA have won four of their last six European away games and have failed to score in just two of their last 19 away from Moscow.

* CSKA had a disastrous 6-0 defeat to Olympique Marseille on their first visit to France in the inaugural CL season in 1992-93 but have won two out of three in France since, beating Nancy 4-3 in the UEFA Cup three seasons ago and Paris St Germain 3-1 in the CL four seasons earlier.

* Basel have lost five of their last six CL home games but the one exception was a 1-0 win over CFR Cluj last season, Otelul's predecessors as Romanian champions.

* Basel have failed to score in only one of their last 16 European matches.

* Otelul, making their debut in the competition, have a limited European pedigree. They have played a mere 14 matches, 12 of them in qualifying rounds, and have won just one away game in seven, a 4-1 win over Dinamo Tirana in the 2004-05 UEFA Cup.

* Otelul have failed to score in five of their last eight European games.

(after extra time, in London)

* Benfica have won their last six European home games and nine of the last 10.

* Benfica have won four of their last five home games against English clubs and have lost just one of the last seven - though that was against United in 2006-07.

* Before losing to Barcelona in last year's final, United had won five successive CL games and were unbeaten in 13.

* United, who have a superb record against Benfica, have not conceded a single goal in their last six CL away games, five of which they have won.

* Dinamo, when playing as Croatia Zagreb in their last CL appearance 12 season ago, lost two of their three group home games.

* Dinamo beat Villarreal 2-0 at home in last season's Europa League group stage but that is their only victory over a Spanish club in 10 matches played, seven of which were lost.

* Real are unbeaten in their last six CL away games and have lost only one of their last 10.

* Real lost 3-1 to Rijeka on their only previous visit to what is now Croatia in the 1984-85 UEFA Cup. But they won the return 3-0 in Madrid and went on to win the title.

* Ajax have lost two of their last three European home games, including a 4-0 defeat to Real Madrid in their last CL match in Amsterdam.

* Ajax have failed to score in only one of the 18 matches they have played against French clubs and that was more than 30 years ago when they drew 0-0 in Strasbourg with Racing in the 1980 European Cup quarter-finals.

* Lyon have lost five of their last six CL away games and have conceded 10 goals in their last three.