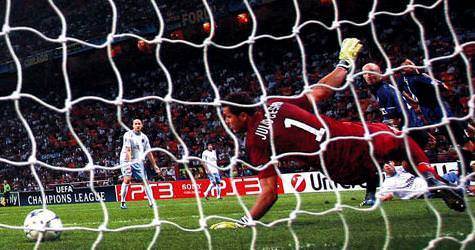 Inter Milan were the unwitting fall guys in the first week of the Champions League when they suffered a humbling home defeat on Wednesday by Trabzonspor, the Turkish team handed an unlikely free pass into Europe's premier club competition.

Inter, who beat Bayern Munich to win the trophy in 2010, lost 1-0 in their Group B opener at the San Siro against Trabzonspor, by far the biggest surprise in the eight groups.

"Football is made up of episodes, unfortunately we didn't manage to score and with just one shot at goal they netted. We have to keep our heads low and work hard," said Inter captain Javier Zanetti.

"It is a difficult moment. I hope the fans understand and together we can get out of this."

With Lille drawing against CSKA, Trabzonspor are the unlikely early pacesetters in Group B.

That represents a startling turn of events given they were supposed to be in the Europa League before being upgraded by UEFA after Turkish champions Fenerbahce were expelled over match-fixing allegations. While conceding most of the possession to Inter, Trabzonspor looked perfectly at home in the setting.

A solid performance turned into a memorable one 14 minutes from time when Ondrej Celustka turned the ball home after Halil Altintop's shot rebounded off the crossbar. The Turkish runners-up, only in the competition after Fenerbahce were withdrawn because of match-fixing allegations, looked comfortable throughout before Celustka expertly hooked the ball in on the slide after Halil Altintop hit the bar. Just before the goal, Inter substitute Diego Milito spurned two gilt-edged chances when his close-range effort was saved and then his header went over but generally the hosts were poor in their opening Group B clash.

While the Turks celebrated, Inter's new boss Gian Piero Gasperini will come under early pressure after losing his first three matches in charge, including the Italian Super Cup defeat by AC Milan.


"We are not in a lucky moment, this defeat leaves us with lots of regrets but the team know they have given a lot and put in a decent showing," Gasperini told Sky TV. "We are a team that will definitely get better, we have potential and will get injured players back. The will and the determination of the players is clear. Moratti has always really supported me." The coach has already been criticised in the media by however by the club's owner Massimo Moratti, who has seen bosses Jose Mourinho, Rafa Benitez and Leonardo leave since their 2010 treble as last season went sour.

Moratti has also been left red-faced after the club failed to realize that new striker Diego Forlan was ineligible for the Champions League because of European action this term for Atletico Madrid. Former Genoa coach Gasperini, inexperienced at the top level, abandoned the three-man defense that flopped in Sunday's opening 4-3 Serie A defeat at Palermo and reverted to their traditional four at the back but it made little difference.
A spark was lacking and the hosts only really came to life midway through the second half when Mauro Zarate had a shot saved at the near post and then strike partner Giampaolo Pazzini failed to connect with the goal at his mercy. Wesley Sneijder wasted another free kick just after the break and Inter continued to labour with their slow build-up play giving the visitors ample chance to cover any gaps.
Disjointed Inter were second in Serie A last season behind Milan and few fans expect the current crop to challenge for a title in Europe this campaign. Wednesday's performance will reinforce that view and send odds tumbling of Inter going through a fifth manager in just over a year even if Trabzonspor failed to offer much threat until Czech Celustka's goal.
The visitors, who had two players suspended and coach Şenol Güneş banned from the bench, had goalkeeper Tolga Zengin to thank for some smart saves late on. Inter next travel to CSKA Moscow on Sept. 27 when Trabzonspor host Lille, who drew 2-2 at home to the Russian side in their group opener on Wednesday.