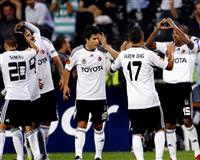 Starting off the league with a derby against Eskişehirspor, last night Beşiktaş took a deep breath for Europe only to let out five goals. Beşiktaş has situated themselves in the top of the group by beating Maccabi Tel Aviv with scores by Almeida (2), Aurelio, Egemen and Edu.

Having started off on the wrong foot with a loss against Eskişehirspor, Beşiktaş managed to lift morale with a game played for the Europa League last night. The 5-1 win was like therapy for the team. Last night's rivals Maccabi Tel Aviv were weak. When the goals came early, the Israeli team began to shrink. When added to the exceptional support offered by Beşiktaş fans, a victory last night was not a difficult achievement.
There may not have been a distinct leader in Beşiktaş's first league game against Eskişehirspor, however last night it was Quaresma who took on the position of conductor. To the point that Quaresma's assist in Beşiktaş's second goal last night could have been a moment of schooling for technical directors… Almeida's two brilliant goals in the first 30 minutes of the game brought the Portuguese striker's mojo back. The second half of last night's game was even easier for Beşiktaş. Practically every position transitioned into a goal. Tel Aviv tried to maintain control of the ball in an attempt to put pressure on hosts Beşiktaş. They may have tried but what transpired on the field was reminiscent of a short film. Even though an early goal for Maccabi in the game's second half may have been a sign of hope, Beşiktaş responded soon after with a series of scores themselves. In the end one could easily say… If Beşiktaş had a leader and never strayed from maintaining discipline in their game, then with this line-up and with these stars there would no match they couldn't win…
As for the game's goals… Almeida opened the curtains with a goal scored from a position set up by Aurelio in the third minute. In the 28th, Almeida managed to bring the score up by 2-0 with an amazing pass from Quaresma. In the 50th minute Kehat scored a header for Maccabi from a center pass in from the left wing: 2-1. In the 53rd minute, Fernandes centered the ball and Aurelio sent a header into the post bringing the score up to 3-1. It's not over yet! In the 55th minute, Quaresma's center pass from the right wing was met by a flying Egemen who headed the ball into the net. With this goal, Egemen redeemed himself after shooting the ball into his own goalpost in Beşiktaş's first league game against Eskişehirspor.
When the fans began to chant 'Five, Five' their wishes were soon answered.
EUROPE HEAR OUR VOICE
In the 88th minute, Edu worked his way in behind the defense to pass Nivaldo and sent the ball straight past the goalkeeper: 5-1. In the end we are very pleased to follow suit with Trabzonspor in keeping off a great start to a European journey.
BEŞİKTAŞ, A TEAM OF FIRSTS
Playing in the Europa League group stage for the fifth time, Beşiktaş has started off strong. By securing a significant win against the Israeli team Maccabi Tel Aviv, Beşiktaş is now situated in the top spot of their group. Up until now the team has only ever once made it past the group stage once prior. Contending in the UEFA Europa League in the 2004-2005, 2005-2006, 2006-2007 and lastly the 2010-2011 seasons, Beşiktaş only signed their name onto the next round last year. Paired against Dinamo Kiev last season, Beşiktaş ended their European adventure with 4-0 and 4-1 losses. Last night's game also marked a first for Beşiktaş in being their first win against an Israeli team.