Women had the voice and not Fenerbahçe last night 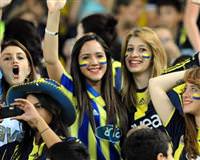 Due to a penalization, only women and children under the age of 12 were able to attend Fenerbahce’s game against Manisaspor last night.

This was the first game in which the Turkish Football Federation's decision to have free admission for women and children in penalizations involving spectator bans was put into practice. Last night, over 41,000 free tickets were used by female and young fans who filled Fenerbahçe's Şükrü Saraçoğlu Stadium.
Although Fenerbahçe took the lead with a score by Dia, Manisaspor managed to secure a draw even though the team was left with just ten players on the field. Nizamettin was shown a red card in the 48th minute. Although Fenerbahçe relaxed a bit they continued to secure the win with a second goal. In the end it was Ömer who scored for Manisaspor. Fenerbahce's nine-game winning streak in the Spor Toto Super League has effectively come to an end.