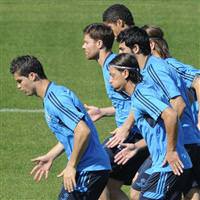 The nine-times European Cup winners return to Champions League action at home to Ajax Amsterdam on Wednesday as Group D leaders thanks to an uninspiring 1-0 win at Dinamo Zagreb two weeks ago which was the starting point for their dip in form.

A shock 1-0 defeat at Levante and a 0-0 draw at Racing Santander followed and Saturday´s 6-2 battering of Rayo Vallecano did not stop reporters asking defender Alvaro Arbeloa on Monday about the squad's morale and its relationship with Mourinho.

"We are all totally united and the atmosphere is good even after a week which has been quite difficult," Arbeloa told a news conference.

"Some of us players have come out and denied this talk of supposed divisions or a bad atmosphere and I do so again."

There was a heated debate at Real's general assembly at the weekend with some members accusing the outspoken Mourinho of damaging the club's image with his behaviour.

That prompted a robust defence of the Portuguese coach from club president Florentino Perez.

On Wednesday, Mourinho completes the last game of a three-match ban imposed by UEFA for an outburst after last season's notorious semi-final clash with eventual champions Barcelona.

"Everyone at the club is united, not just from yesterday but they have been for a long time," said assistant coach Aitor Karanka.

"We are all working in the same direction. The coach was the first to dismiss this talk of a crisis."

Turkey midfielder Hamit Altintop has been included in a Real squad for the first time since joining the club in the close season and defender Ricardo Carvalho is also back after recovering from a blow to the head he received last week.

Ajax coach Frank de Boer said he was especially looking forward to the clash given his background as a former Barcelona player.

"Madrid are a great team and to win we will have to do very well," the Dutchman said. "Mourinho is a great coach [but] he has made mistakes, he knows that."