Victory over Man City would put Bayern in box seat 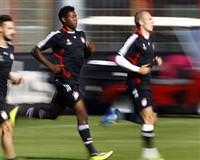 Bayern Munich's home game with Manchester City is the highlight of the second round of Champions League group matches on Tuesday and victory for the Germans would put them in the box seat in the tournament's most competitive section.

The Bavarians, who are in fine form and occupy top spot in the Bundesliga after seven games, can make it two wins out of two in Group A which also contains Napoli and Villarreal who meet in Italy.

United will be forced to ring the changes as they go in search of their first win in Group C, with in-form strikers Wayne Rooney and Javier Hernandez among a glut of absentees for last season's beaten finalists.

Inter, who sacked coach Gian Piero Gasperini last week, hope to repair some of the damage done by their opening-round Group B defeat by Turkish side Trabzonspor and build on Saturday's first Serie A win of the season against Bologna.

Nine-times European champions Real Madrid look to put an uninspiring start to their domestic campaign behind them with a home victory over Ajax Amsterdam in Group D which also features Olympique Lyon's tie with Dinamo Zagreb.

Trabzonspor host Lille in the other match in Group B and Romanians Otelul Galati entertain Benfica in Group C.