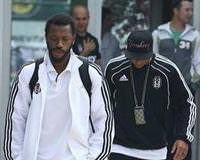 According to an announcement by the club's website, there will be 430 tickets seat aside for Beşiktaş fans to purchase at the ticket booth prior to tomorrow night's game which kicks off at 22:05.
Beşiktaş face off against Stoke City in an away game for the second week of games in Group E tomorrow evening.
Technical Director Carlos Carvalhal has released the names of the 19-member line-up which has departed for England. In addition to Spanish player Guti, injured players Alves, Almeida and İbrahim Toraman will not be joining the team.
Carvalhal's line-up for the Stoke City match is as follows: