Sultans play for the finals 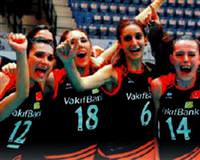 The ‘Sultans of the Net’, Turkey’s Women’s Volleyball Team plays Serbia, the hosts of the European Volleyball Championship in the semifinals this evening at 21:00. Trainer Motta states, "We are not afraid of our competitors”.

Turkey's A National Women's Volleyball Team plays Serbia tonight at 21:00 for the European Volleyball Championship semifinals. Tonight's game, which will be played in Belgrade's Hala Pionir Beograg Sports Center, will be broadcasted live on NTVSpor. Expressing that the Serbian team is a strong one, Brazilian trainer Motta states, "We must not forget that we have consistently beaten strong teams in the championship. First we were victorious against the European Champions Italy, and then we went on to win against World Champions Russia. Now, it's Serbia's turn."

WE HAVE TO SETTLE THE SCORE
Reminding of a previous loss to Serbia in a past European League, Motta goes on to state, "We want to settle the score by beating Serbia in their court. Our rivals have fiery fans. However, our team is used to that. This will be a tough game. We are confident in ourselves."


National Team Manager Uğur Sevimli says that the players have high morale and motivation prior to tonight's tough game. Sevimli also explained that at present, there are no injured players and stated, "Our players have begun to concentrate on today's game."

OUR GOAL IS TO PLAY IN THE FINALS A SECOND TIME
Reminding that they once played in the finals in the 2003 European Championship held in Turkey, players from the National Team say, "by beating Serbia today, we want to reach the finals for the second time in history. By beating world champions Russia, and every game we have won thus far has increased our confidence and we are not intimidated by any team."