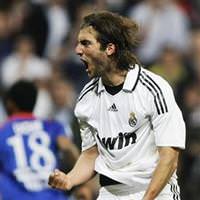 Real Madrid host Olympique Lyon in Champions League Group D on Tuesday with striker Gonzalo Higuain in the form of his life and providing coach Jose Mourinho with a welcome selection headache.

The Argentina striker, who missed most of the second half of last season with a back injury, netted his third hat-trick in two weeks in Saturday's 4-1 La Liga win at home to Real Betis and is making a strong case for a regular starting spot ahead of former Lyon forward Karim Benzema.

"It's hard for me to say this one's a starter and that one isn't," Mourinho told a news conference after the Betis game.

"There is no such thing as a starter for me when one has players as good as these," the Portuguese added.

"It's difficult for one footballer to play three, four, five or six games, and for another to be benched for three, four or five. They're all very good players.

"Karim had a very good start and Higuain is currently scoring goals. This is excellent for all of us."

Benzema, who made 112 Ligue 1 appearances and scored 43 goals for Lyon, has also been in good form for Real this term and Mourinho said the France international was ready to return to action after shaking off a minor muscle strain.

"Benzema was on the bench (against Betis) and ready to come on if we had trouble in attack," Mourinho said.

"We then scored and there was no reason to take risks. He's just recovered from an injury and it will be better for him to train tomorrow (Sunday) and on Monday."
BASTOS DOUBLE

Lyon, second in the group on four points behind Real who have six, geared up nicely for the clash at the Bernabeu by beating Nancy 3-1 in Ligue 1 on Saturday, scoring three first-half goals in five minutes.

With the Real game in mind, Lyon eased off after halftime and remain third in the domestic standings.

"We did not want to waste too much energy because it will be another story in Madrid," said France striker Bafetimbi Gomis, who scored his seventh league goal of the season.

"I think Madrid was on everyone's mind," coach Remi Garde added as he tried to explain Lyon's below-par second half. "At least I hope so."

Lyon could be missing Argentina striker Lisandro Lopez, who has been out for seven weeks with an ankle injury and failed to recover in time for the Nancy match.

France goalkeeper Hugo Lloris, who was ruled out on Saturday by illness, is expected to be available.