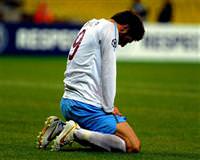 Seydou Doumbia struck twice to lead CSKA Moscow to a 3-0 win over Trabzonspor in the Champions League on Tuesday for their first win in Group B.

The victory put CSKA level with the Turkish side on four points, two behind Inter Milan, 1-0 winners at Lille.

Ivory Coast striker Doumbia put the Russians ahead in the 29th minute after being set-up by Vagner Love's clever back-heel.

The Brazilian also helped set up the second goal scored by substitute Aleksandrs Cauna who struck a fine volley midway through the second half.

Doumbia, who scored CSKA's goals in a 2-2 draw at Lille in their group opener last month, completed the rout with a great solo effort four minutes from time.

Trabzonspor are only in the group stage after Fenerbahce were banned from the competition over a match-fixing scandal in Turkey but they came to Moscow in first place after a shock 1-0 away win over 2010 champions Inter in their opening game.

"Trabzonspor are a good team with good players and their win over Inter Milan did not surprise me at all," Doumbia told reporters. "But tonight we were the better team because we created a lot of chances and scored three goals and also kept our concentration from the first minute to the last."

However, the visitors, missing leading scorer Burak Yilmaz through suspension, looked tentative for most of the match, creating only a handful of chances.

Brazilian midfielder Alanzinho wasted their best opportunity early in the game with the score at 0-0 after going one-on-one with CSKA keeper Vladimir Gabulov.

"We controlled the tempo and created most of the chances in the game while they only had one clear chance in the first half.

"I'm especially pleased because we did not give up a goal in a Champions League match for the first time since holding Arsenal (to a 0-0 draw in London five years ago)."

"We didn't win but it's not the end of the world. We still have three more games to play," said the Trabzonspor coach.