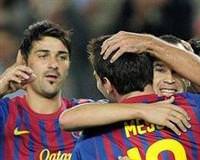 
Playmaker Iniesta netted for the holders as early as the 10th minute at a balmy Nou Camp arena but in the face of near-constant pressure on their goal the visitors somehow managed to hold firm until Villa scored eight minutes from time. World Player of the Year Lionel Messi had a frustrating night, twice hitting the post and several times being denied by last-ditch tackles after typically breathtaking runs. The Czech champions, making their debut in Europe's elite club competition, did not muster a shot on goal while Barca had 18 attempts -- although only four on target -- and more than 70 percent of possession. The victory, which extended Barca's unbeaten run to 19 in all competitions, lifted them to seven points after three of six games, level with Italian side AC Milan who beat BATE Borisov of Belarus 2-0. Plzen and BATE, who lost 5-0 at home to Barca on matchday two, each have one point. "We found it tougher to decide the match than usual but we are pleased to have the win and to make progress," Villa said in
an interview with Spanish television. "When you are only 1-0 ahead things can get difficult because it's only a narrow lead but typically we would convert at least one of our chances."
DAZZLING RUN

Iniesta's goal came after a trademark quickfire passing move that left the visiting defenders in disarray. He twice exchanged passes with Messi before dinking the ball around his marker and sidefooting narrowly inside the near post from close range. Villa made sure of the three points when he followed up after a Messi effort and swept the ball high into the net. Messi, Champions League top scorer the past three seasons, had earlier curled a long-range free kick on to the inside of an upright and flicked the ball on to the post after a dazzling run early in the second half. Plzen's failure to muster a shot was only the second time that has happened in a Champions League game in the last five seasons after English Premier League side Arsenal suffered the same fate against Barca last term. Plzen coach Pavel Vrba was under no illusions about the overwhelming superiority of his side's opponents and said Barca
were "in a league of their own". "I watched the last few games Barca played and it's always the same story with them totally dominating possession," he told a news conference. "The Barca players are the best in the world and I would say they are perfection, there is no other way to define it. "I said yesterday it would be a miracle if we were able to stop those players but we were not able to manage it."