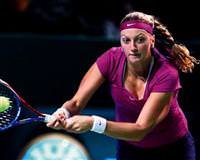 A weary Caroline Wozniacki was sent packing from the WTA Championships in Istanbul after losing 6-4 6-2 to powerful Czech Petra Kvitova in her final round-robin match on Thursday.

The day after the Dane secured the year-end world No 1 ranking, she looked mentally and physically drained as Wimbledon champion Kvitova marched into the semifinals with a match to spare in the Red Group.

Wozniacki, who has racked up 80 matches on the tour this year, needed to have her blood pressure checked after the first set and said after that she had nothing left in the tank.

Kvitova was joined in the last four of the season-ending event by Belarussian Victoria Azarenka who trounced China's Li Na 6-2 6-2 to guarantee a top-two place in the White Group, also with a match remaining.

Russian Vera Zvonareva blew her chance to secure a semifinal berth when she was ambushed by Poland's Agnieszka Radwanska, squandering three match points in a 1-6 6-2 7-5 defeat that had the 11 000 crowd on the edge of their seats.

Needing a victory to go through from the Red Group, Zvonareva led 5-3 in the decider before Radwanska staged a thrilling fightback in the most entertaining set of the tournament.

Zvonareva must now hope Kvitova beats Radwanska in straight sets on Friday. Any other result would see the Pole progress.

After two long three-setters in two days, a win against close friend Radwanska and a defeat by Zvonareva, Wozniacki proved no match for world No 3 Kvitova.

Having lost the first set the Dane quickly went 4-0 behind in the second and at one point almost missed the ball altogether on a first serve -- the ball spinning embarrassingly off her racket and bouncing mid-court.

Some late resistance proved in vain.

"Petra played well," said Wozniacki who will end a second consecutive year as No 1 despite failing to win a maiden grand slam.

"I wish I could have been 110 per cent but my body just didn't want to do the things I wanted today. I've been feeling a bit tired and to get a little bit sick now, that's not the best if you want to beat the top players," she told reporters.

Wozniacki said the left-handed Kvitova, the first Czech to qualify for the year-ender since Jana Novotna in 1998, would be tough to stop on the bright green and purple indoor court that has proved much to her liking.

The other semifinalist from the White Group will be decided on Friday with the winner of the match between French Open champion Li and US Open champion Samantha Stosur of Australia joining Azarenka in the last four.

"It's just like a normal tournament now," said the 29-year-old Li. "The winner can go on in the draw and the loser has to go back. It's tough. Both of us will be fighting a lot."

World No 4 Azarenka arrived in the cosmopolitan Turkish city on the back of winning the title in Luxembourg last week and has been the most impressive of the eight players on display, although Kvitova is not far behind.

The 22-year-old has dropped just eight games in beating this year's surprise grand slam champions Stosur and Li and looks in the mood to finish 2011 on a high by collecting a possible $1.75 million jackpot for winning the title undefeated.

After Li swiped a forehand long to end the one hour 32 minute contest, Azarenka performed an exuberant victory celebration and is clearly inspired by the atmosphere generated by around 11 000 fans inside the cavernous Sinam Erdem Arena.

"I'm always pumped up. I play a bit hard and I was glad I could finish strong," she said.

"The crowd is amazing. That's what we've been really missing in the last couple of years, a good crowd, good support," added Azarenka who failed to survive the group stages in the last two seasons when the event was held in the more tranquil surrounds of Doha.

Despite already qualifying the Belarussian said she would not be holding back in her final round-robin match on Friday against Frenchwoman Marion Bartoli, the replacement for Maria Sharapova who pulled out with an ankle injury.

"I always play 100 per cent," said Azarenka who had extra reason to smile after announcing she had received her Monte Carlo resident's permit earlier in the day.