Real Through To Knock-Out Stage, Bayern On Brink 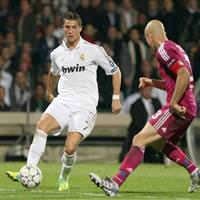 Cristiano Ronaldo took a leaf out of Lionel Messi’s book when he reached a personal landmark and led Real Madrid into the Champions League knockout stages by scoring both goals in a 2-0 win at Olympique Lyon yesterday.

Ronaldo's great rival Messi scored his 200th goal for Barca 24 hours earlier and hit a hat-trick in a 4-0 demolition of Czech champions Viktoria Plzen which sparked Ronaldo to respond with his landmark 100th goal for Real.

His goals helped the Madrid club into the knockout round alongside Barca and AC Milan, who also qualified on Tuesday with a 1-1 draw at BATE Borisov.

Real's form is also better than Barca's with perfect figures of four wins out of four, the only team in the competition still with a 100 per cent record.

Ronaldo scored with a free kick midway through the first half and doubled his tally from the penalty spot in the second with his 100th goal for Real in 105 matches since joining from Manchester United in 2009.

"All the goals are special all the more so when it helps the team to win," Ronaldo said.

Benfica and Bayern Munich could both have joined Barcelona, Milan and Real in the last 16, but their progress was delayed for different reasons.

Bayern, who beat Napoli 3-2 at home with Mario Gomez scoring a first-half hat-trick, could only have advanced if Manchester City had lost at Villarreal, but the Premier League leaders were too strong for the injury-hit Spaniards, winning 3-0 with Yaya Toure scoring twice and Mario Balotelli converting a penalty.

Gomez scored three times in 25 minutes to take his Champions League goal tally to 17 and become the top German scorer in the competition, beating Michael Ballack's record of 16.

He almost scored another with an 80-metre effort late in the game but Napoli's keeper Morgan De Sanctis managed to save after racing back to clear off the line at the last second.

Those results left Bayern top of Group A with 10 points, followed by City on seven, Napoli five and Villarreal eliminated with none.

Benfica would have advanced from Group C by beating Basel at the Stadium of Light, but they failed to capitalise on a fourth-minute goal from Rodrigo and were punished after allowing Basel back into the game.

The Swiss champions, who drew 3-3 at Manchester United in their last away group game, got their reward when they equalised with a 64th-minute goal from Benjamin Huggel.

Manchester United took advantage of Benfica's slip to move top of the group by beating Romanians Otelul Galati 2-0 at Old Trafford with goals from Antonio Valencia and an own goal by Cristian Sarghi who deflected a Wayne Rooney shot past his own keeper.

Although it was a laboured performance United and Benfica now look set qualify, although Basel are not out of the running.

Inter Milan, whose side had an average age of 31.5 months, the oldest since the Champions League began, beat Lille 2-1 at the San Siro and increased their lead in Group B to four points over CSKA Moscow and Trabzonspor who drew 0-0 in Turkey.

Inter, struggling in Serie A, put their domestic problems behind them with their third Group B win in a row to edge closer to the last 16.

Ajax Amsterdam also had a good night, moving closer to qualification in Real's Group D with a 4-0 thrashing of Dinamo Zagreb who have lost all four matches without scoring.