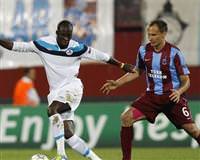 Top scorer: Mario Gomez (Bayern) 6 Qualifying chances: Napoli will join Bayern in the knockout stages if they beat Villarreal or if Manchester City fail to beat Bayern.
MANCHESTER CITY v BAYERN MUNICH
Head-to-head record Played: 1 Wins: Bayern 1 Previous match CL: GP 27/09/11 Bayern Munich 2 Manchester City 0
* City are unbeaten in their last 14 European home games of which they have won 11. In all, they have lost only twice in 35 European matches in Manchester.
* City striker Mario Balotelli has scored in his club's last two CL games against Villarreal and Napoli, his only appearances in this season's competition. At previous club Inter Milan he scored a mere two goals in 14 CL matches.
* Bayern have won six of their seven games this season in the CL and the qualifiers and are unbeaten. They have won 14 of their last 18 European games.
* Bayern lost on their last trip to Manchester two years ago when they went down 3-2 to City rivals United in the CL quarter-finals. But the game brings back good memories for them they came back from 3-0 down in the first half, scoring twice and going into the semi-finals on away goals.
VILLARREAL v NAPOLI
Head-to-head record
Played: 3 Wins: Napoli 1, Villarreal 1, draws 1
Previous matches EL: R3 17/02/11 Napoli 0 Villarreal 0 24/02/11 Villarreal 2 Napoli 1 CL: GP 27/09/11 Napoli 2 Villarreal 0
* Villarreal are on a dismal run of six successive CL defeats in which they have scored a measly two goals.
* However, Villarreal have not lost at home to an Italian club and have won four out of five such games, including last season's 2-1 victory to eliminate Napoli from the Europa League.
* Napoli have scored 11 goals in their last six European away games - but have not won any of them. They have yet to record an away win in the CL.
* Napoli's Uruguayan striker Edinson Cavani, who netted both goals in their last CL game, a vital 2-1 win over Manchester City, has scored seven goals in Napoli's last seven European away games though he failed to put his name on the scoresheet in last season's Europa League game at Villarreal where he came on as a second half substitute.
GROUP B
P W D L F A Pts
Inter Milan 5 3 1 1 7 5 10Q
Trabzonspor 5 1 3 1 3 5 6
Lille 5 1 2 2 6 6 5
CSKA Moscow 5 1 2 2 7 7 5

Top scorer: Seydou Doumbia (CSKA) 4 Qualifying chances: Inter are through and all the other three are in contention. The winner of the Lille v Trabzonspor clash would join them in the last 16. But if that game finishes in a draw, Trabzonspor would qualify provided CSKA do not beat Inter.
In that eventuality, CSKA would reach the knockout stage.
LILLE v TRABZONSPOR
Head-to-head record Played: 1 Draws: 1 Previous match CL: GP 27/09/11 Trabzonspor 1 Lille 1
* Lille have won only three of 12 CL home games and are without a win in the last four.
* Lille are unbeaten in the three games they have played against Turkish clubs and beat Fenerbahce 2-1 two seasons ago in the Europa League, the only one of the three played at home.
* Trabzonspor have not won any of their four CL matches since their surprise 1-0 away win over Inter Milan on their debut in the competition. *
Trabzonspor won on both of their two previous visits to France, a 1-0 victory over Toulouse two seasons ago in the Europa League and a 4-3 triumph against Olympique Lyon in the 1991-92 UEFA Cup.
INTER MILAN v CSKA MOSCOW
Head-to-head record Played: 5 Wins: Inter 5 Previous matches CL: GP 23/10/07 CSKA Moscow 1 Inter Milan 2 7/11/07 Inter Milan 4 CSKA Moscow 2 CL: QF 31/03/10 Inter Milan 1 CSKA Moscow 0 6/04/10 CSKA Moscow 0 Inter Milan 1 CL: GP 27/09/11 CSKA Moscow 2 Inter Milan 3
* Inter have stuttered at home of late in the CL, losing three of their last four at the San Siro. If they win this one it will be their 50th CL victory in their 103rd game in the competition.
* Inter have a fantastic record against Russian clubs. Apart from winning five out of five against CSKA, they have lost just once in 17 games with teams from Russia, a 3-0 defeat to Lokomotiv Moscow in the 2003-04 CL. They have won seven and drawn one of the eight home games.
* CSKA have a good away record with just one defeat in their last six in the CL - but that was against Inter. * It will be CSKA's 40th CL match. They have won a mere nine and lost 20.

Top scorer: Alex Frei (Basel) 4 Qualifying chances: Benfica have qualified because their results against United and Basel put them in a position where their two rivals cannot both overtake them. The other qualifying place comes down to the last match between Basel and United. Basel must win. United need only draw.
BASEL v MANCHESTER UNITED
Head-to-head record Played: 3 Wins: United 1, draws 2 Previous matches CL: GP2 26/11/02 Basel 1 Manchester United 3 12/03/03 Manchester United 1 Basel 1 CL: GP 27/09/11 Manchester United 3 Basel 3
* Despite Basel's spirited 3-3 draw in the away game in Manchester, the Swiss club must be nervous of the decider at home where they have lost six of their last eight CL games.
* Basel have won only one of the 12 matches they have played against English opposition, a 2-0 victory over Middlesbrough in the UEFA Cup quarter-finals in 2006. They have lost six of the last eight against English teams.
* United are unbeaten in their last eight CL away games in which they have conceded just one goal in total. Six of those games were victories.
* Brazilian defender Fabio and Ecuadorean winger Antonio Valencia are the only United players to have started each of the five CL matches this season.
BENFICA v OTELUL GALATI
Head-to-head record Played: 1 Wins: Benfica 1 Previous match CL: GP 27/09/11 Otelul Galati 0 Benfica 1 * Benfica are unbeaten in their last eight European home games but drew both of their CL matches in Lisbon this season against Manchester United and Basel.
* Benfica have won their last four games against Romanian clubs and have lost just one in 11 altogether, going down 1-0 to Dinamo Bucharest at home in the 1999-2000 UEFA Cup.
* Otelul are still without a point in their debut CL season and have not won any of their last nine European games.
* Otelul have lost seven of the nine European away games they have played, winning just once, a 4-1 win over Dinamo Tirana in the 2004-05 UEFA Cup. That remains their last win in Europe.
GROUP D
P W D L F A Pts
Real Madrid 5 5 0 0 16 2 15Q
Ajax Amsterdam 5 2 2 1 6 3 8
Olympique Lyon 5 1 2 2 2 6 5
Dinamo Zagreb 5 0 0 5 2 15 0
Top scorer: Karim Benzema (Real) 4 Qualifying chances: Real Madrid are already sure to top the group. Ajax look set to join them.