Galatasaray and Fenerbahçe face off tonight! 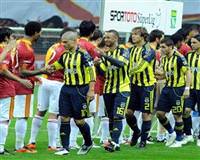 Turkey has been holding its breath for tonight’s game as Galatasaray gets set to host league leaders Fenerbahçe. Following in second in the league standings, should tonight’s hosts win, they will have closed the gap on the three-point difference between the two teams in the Spor Toto Super League.

Tonight's game, which is also the final derby of the year, kicks off at the Türk Telekom Arena at 19:30. FIFA Referee Fırat Aydınus will be overseeing the game, joined by Serkan Ok and Alex Taşçıoğlu with Mustafa Kamil Abitoğlu on as fourth referee.

-A fight for league leadership-
Tomorrow night's derby, played at the Türk Telekom Arena, pits archrivals Galatasaray and Fenerbahçe in a game that could alter the current league standings. After 13 weeks in the Spor Toto Super League, Fenerbahçe is seated in first place with 28 points, while Galatasaray is situated in second place with 25 points. In terms of goal averages, Fenerbahçe takes the lead by a single score.
Should Galatasaray beat their archrivals tonight, their league standing points will be equal and their average may take them over to the leaders seat, which they have not enjoyed for awhile now. Should the game end in a draw, Fenerbahçe will be able to protect their point difference, however should they win, then their lead will rise to six points.
-On the Galatasaray front-
Tonight's hosts Galatasaray intend to secure a win in front of their fans tonight and put an end to their longing for the league leadership as well as to halt their no win streak in derbies which has persisted for over two years now.
Out of the six games played in the Türk Telekom Arena this season thus far, Galatasaray has won four, lost once and drawn once. Tonight injured players Sabri Sarıoğlu and Yekta Kurtuluş, as well as Engin Baytar with a red card penalty and Sercan Yıldırım whose name is listed in the indictment released last week for match-fixing allegations will be absent in the line-up. In defense, Technical Director Fatih Terim will most likely be playing the young Semih Kaya, who he didn't want to risk in the Gençlerbirliği game, and Ujfalusi whose yellow card penalty has come to an end. In the center field will be Kazım Kazım, who was also not played in the capital, and Ayhan Akman, while Elmander, whose red card penalization was lightened, is expected to be played as the sole forward in the derby.
-On the Fenerbahçe front-
Fenerbahçe, who will be faced with playing without the support of fans, fully intends to walk away with the win tonight, as they did last season and to bring their point difference with their arch rivals up to six.
Out of the six away games played this season, Fenerbahçe has won three, tied in two and lost one. Fenerbahçe has not secured a win in the last three away games played, however they hope to continue their superiority over the years in derby games into tonight's match.

Fenerbahçe's injured players Serkan Kırıntılı and Sezer Öztürk will also not be donning a uniform tonight. There is a big chance that Mehmet Topal, who is still undergoing treatment, will also be unable to play. Meanwhile, after suffering an ankle injury the day prior, Bekir İrtegün's status continues to remain unclear.


If Technical Director Aykut Kocaman refrain's from playing Bekir İrtegün in defense, he is anticipated to play Bilica and he may give Caner Erkin a chance in the center left, instead of Stoch, due to facing foreign player quota troubles.