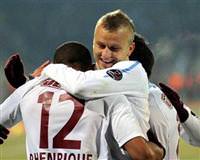 Trabzonspor is embarking on a huge European battle tonight against Lille in order to continue on in the Champions League.

Trabzonspor travels to France to face off against Lille in the final game for Group B in the UEFA Europe Champions League. They hope to continue their streak of firsts, by getting past the group stage round, of which qualifying for was already a historical first for the team.

With Inter having already qualified at ten points, Trabzonspor is in second with six points followed by Lille and CSKA Moscow with five points each. If Trabzonspor secures a victory tonight against Lille, they will qualify to continue on. However, even a tie should suffice for Trabzonspor assuming CSKA Moscow is unable to beat Inter away.
Should Trabzonspor finish third in the group, they will then move on to play in the UEFA Europa League. Trabzonspor's injured players Vittek and Tayfun will be unable to play in tonight's difficult game. Volkan Şen, who scored in the game against Sivasspor, will also be sitting out tonight's game due to a status formality. In Lille, an injured De Melo will also not be in the line-up.

Burak Yılmaz, who is currently seated in first place for goal king in Turkey's Spor Toto Super League, with 13 goals scored, will be seeking out a score tonight in Europe.
Tonight's game kicks off at 21:45 at the Metropole Stadium. Proenca Oliveira Alves Garcia from Portugal's Football Federation will be refereeing accompanied by Jose Tiago Garcias Bolinhas Trigo and Ricardo Jorge Ferreira Santos.