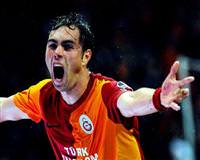 Galatasaray beat their archrivals at home last night with three goals scored by new transfers and has now become seated in the leadership position for the Spor Toto Super League.

Galatasaray didn't give their rivals Fenerbahçe a chance to catch their breath in the first half. Despite Volkan's superior performance, Galatasaray went into half time two goals up, with scores by Eboue and Elmander. In the second half of the game Melo's goal sealed the deal for Galatasaray who has officially taken over the league leadership spot from last night's rivals Fenerbahçe.
By scoring against Fenerbahçe last night, new transfers Eboue, Elmander and Melo have officially been adorned the Galatasaray title. Technical Director Fatih Terim was reborn of sorts in what may be the Renaissance of Galatasaray.
Alex scored Fenerbahce's sole goal, which was also the seventh scored against Galatasaray in the captain's career.