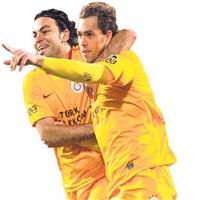 After scoring three goals against Fenerbahçe in this week’s derby, last night Galatasaray secured a victory with three goals once again, this time in Trabzonspor’s Avni Aker Stadium. In just four days, Galatasaray has secured six points in the league from two derbies, scored six goals in total and have now become the league leaders.

On one hand we had Trabzonspor, who was demoralized following the game ageist Lille and having to say goodbye to their Champions League adventure. Meanwhile, on the other hand was a Galatasaray soaring high after their recent win against Fenerbahçe.
Trabzonspor started off with duo forwards Burak and Henrique. However all the balls tended to head towards Burak, and it seemed he would be Trabzonspor's sole shot at a score. There was no other option, as both Halil and Henrique were playing close to the line. With this picture, it appeared Trabzonspor was left with a single person offense. Meanwhile, as Trabzonspor attempted to stage an offense, five players would remain in the center field. Although their intentions were to ensure they weren't scored against themselves, Galatasaray managed to do so, with their own smart playing skills, a total of three times.
In the first half of the game, with the exception of a few shots, Trabzonspor lacked in creating positions. In the second half, Galatasaray continued to pass the ball around, exhausting Trabzonspor which was down to ten players. In other words, for Galatasaray it was an easy three points.
THE CURTAIN OPENED AT FIVE
Galatasaray scored their first goal in the fifth minute of the game. On the right, Kazım stole the ball from Cech and passed it on to Elmander. The Swede proceeded to stake out Trabzonspor's goal keeper Tolga, in which he succeeded, bringing the score to 0-1. The goal worked to speed up the game. In the 11th minute, Burak's shot off of Henrique's pass was met by Galatasaray's goalkeeper Muslera without error. In the 14th minute, Colman's shot excited the stands, but that was it. In the 44th minute however Galatasaray had brought the score up to 0-2. A free kick by Selçuk went straight in as Tolga simply watched it go by.
Galatasaray also started off the second half of the game well. In the 47th minute, Melo missed the chance to bring the score up by three. As the star players shot hit the post only to go out, the stadium was silent. In the 55th minute Zokora was thrown out of the game, leaving the hosts down to just ten players. Galatasaray proceeded to take full control. In the 68th minute, Elmander came face to face with the post and struck hard, yet Tolga did not allow the ball to go through. In the end, it was former Trabzonspor player Ceyhun who scored the final goal, bringing the score up to 0-3.
ELMANDER IS ON A ROLL
As he did in the Fenerbahçe derby game, technical director Fatih Terim played Baros and Elmander as double forwards. Elmander was the one to open up the curtains, with a ball that came in from Kazım, which he proceeded to strike with his left foot. Having scored his sixth goal this far, Swedish transfer Ermander has made 20 accurate shots from 36 passes this season thus far.